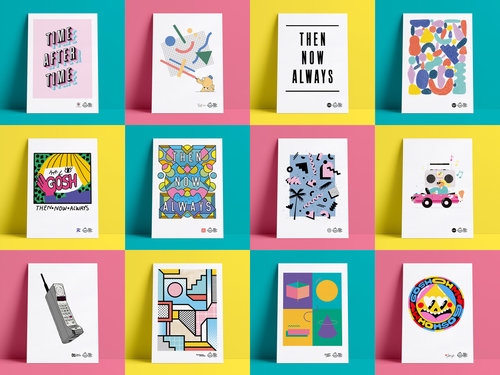 The London Illustration fair is back at the Bargehouse this week, bringing a celebration of creativity and visual culture to the capital for its fifth consecutive year. The four-day festival kicks off on Thursday night with a launch party and anniversary bash, so if illustration rocks your world, this is your chance to mingle with some of the world’s greatest graphic design superstars.

Featured artists include Morag Myerscough, known for her life-affirming messages in bold and riotously colourful typeface, often exhibited in public spaces and acting as an antidote to the grey monotony of city life. She’ll be exhibiting in the entrance space, and other featured installations will include a large-scale mural from East London’s Bread Collective and a pop up shop of 80s-inspired prints and tees being sold to support Great Ormond Street.

If you’re the type of person who can’t handle this much creative inspiration without feeling an overpowering urge to get involved, don’t worry: there’ll also be opportunities to get hands-on with a choice of workshops where you can scratch your illustration itch hard – and perhaps come out with some unique and personal Christmas pressies. They include ‘Everybody Loves Stationery’ (don’t they just), and a tea-towel screen printing session hosted by 3rd Rail. Each workshop is ticketed and priced at £10 a session.