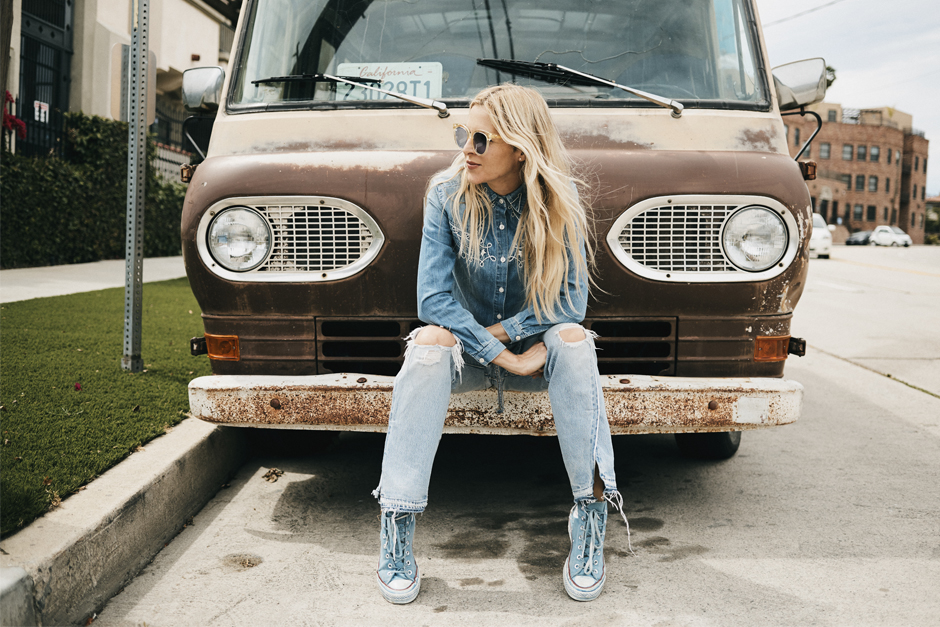 What Amy Leverton doesn’t know about denim isn’t worth knowing. She is genuinely a world authority on the fabric. We spoke to her a couple of years ago when her book ‘Denim Dudes’ came out and when we heard she’d just released ‘Denim: Street Style, Vintage, Obsession‘, which features stylish women (or Dudettes) around the world wearing their favourite denim in their own unique way, we thought we’d have another chat.

How was putting this book different to the last? Did you travel as much?
Well I use different photographers in all the different cities. It’s because of their hard work and dedication that this project is possible at all. I rely on them to treat this as a passion project and they do an amazing job. But aside from that, yes I travel a bunch and have met probably 95% of these women, most of them I count as friends. This book was easier than the last simply because I had Dudes to sell the concept. With dudes, a big part of my frustration was convincing the guys featured that this was a serious project and I meant business! With Dudettes people were much more open and excited to it.

What’s the best story in it?
I like Jo from Goodhood’s story; she bought a Levi’s jacket from a vintage store and years later found a tiny bullet slipped into the fold of the red tab. We used the pic as a double page spread I loved it so much, I think its really iconic. About a week after she was shot for the book she went through airport security into the US and they confiscated it! So we managed to capture that crucial moment in time. There’s another story that’s very sweet: we shot Bart Sights from Levi’s for Dudes and his sister is Carrie, founder of Imogene and Willie. He wore a jean that Carrie had designed and named after him, which had been worn and patched and was really special. When I turned up to shoot with Carrie in DTLA for Dudettes she was wearing literally the same jean. Bart had sent it over from San Francisco for her to wear. It was a lovely idea and a great moment. Recently I was back in SF with Bart and was able to show him the finished Dudettes book and watching him look at her page for the first time was awesome, he got quite emotional!

What’s the best denim in the world?
Japanese denim is famous for a reason, as they obsess over craft and artisanal techniques more than most. What makes the Japanese taste special is their theory of ‘wabi-sabi’ which means the beauty in imperfection. This means that they were very early to catch on to the fact that slow-made and hand-made processes such as hand-loom weaving techniques create these little mistakes or slubs in the fabric; inconsistencies that you just don’t get from modern machinery. So for that reason they make pretty unique denim. They also use higher quality raw materials: cotton, mostly from Zimbabwe, which is stronger with longer fibres. It’s also hand-picked and harvested just once a year. It’s like the pedigree of cotton! I wouldn’t say Japanese denim is the best in the world because the wonderful thing about a pair of jeans is you should pick the jean that’s right for you and one person’s blue-gold might not be right for another. I also strongly believe that at this point we should be paying attention to carbon footprint and trying to buy denim thats travelled the least. There are some great made-in-America and made-in-England jeans out there.

How do you correctly wash denim? Is it by not ever washing it?
Well… again, I think the denim heads get a bit silly about all this when really, nothing should be considered ‘wrong’. The reason people tell you not to wash denim too much is to achieve the best wear patterns. You see, if you wear and wear and wear your jean without washing it, when you do finally wash it (in a bath tub with a gentle detergent, there are denim-specific products out there too) you’re going to get bolder high-low contrasts, ie: the faded parts and the unfaded parts such as behind the knees or around the top-block are going to look bolder. If that’s not your thing, do what you like So my advice: chill out and do what you personally like. I always wash my jeans inside out whether it’s in the tub or in the machine though.

Did you toy with the idea of getting a denim dust jacket for it?
We actually wanted to put both the books in a box set together but my first publisher failed to see the beauty and potential in Denim Dudettes so I had to go to another publisher; Rizzoli. And then the printers made the book 1cm too tall by mistake so all plans were out the window! Sigh.