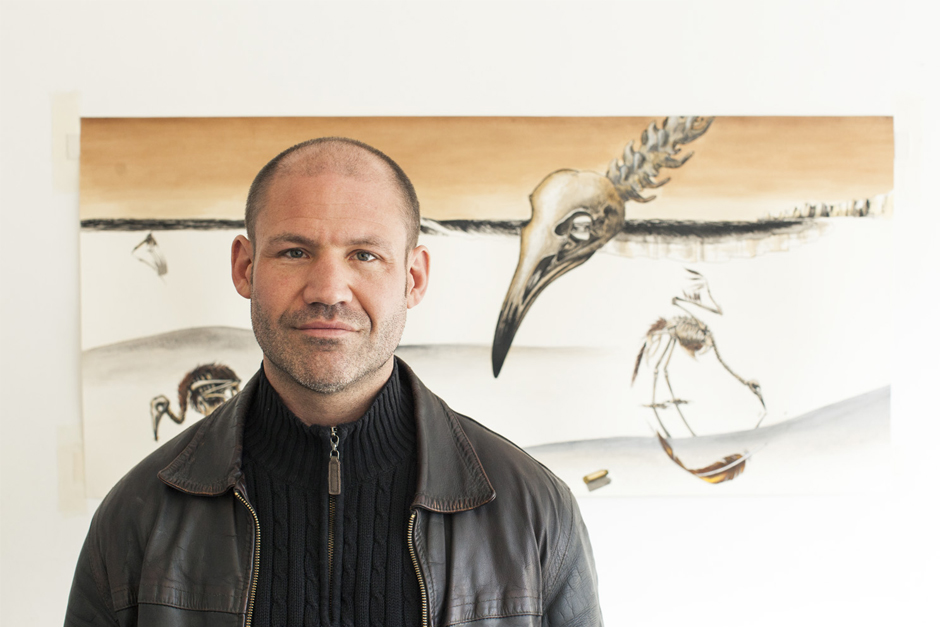 Once upon a time Jim Matthews was better known as the ground breaking graffiti artist Arofish, who’d get his work up in tasty places such as Iraq, Palestine and erm, Deptford… Now he’s doing work on canvas, indoors, where there’s a bit less chance of being shot at. Josh Jones had a chat with him.

Hey Arofish, or Jim… So once upon a time you were a graffiti writer eh? Sounds exciting…
Yes, in a previous life I was. And I’m excited that you’re featuring dead graffers this week; to tie in with the Halloween thing I suppose… So here I am – flyblown and raring to go! Of course it was a special time, Shoreditch in the noughties. Stencils were boss; all you had to do was p*ss a hole in the snow and spray paint through it, and they gave you a show on Brick Lane. My own niche was painting political stencil art in places like Palestine, Lebanon and Iraq – places I happened to be anyway, as a volunteer. From that activist background I started doing more and more ‘arty’ stuff and simultaneously having doubts about the validity of painting in foreign war zones. Then after the Intifada (uprising) quietened down in ’04, droves of artists flocked to the West Bank to paint on the separation wall and get photographed near a tank. So I headed back to Dalston, to get away from the scene…

But that’s then and this is now. You’re doing legit paintings and writing stories am I right?
Yes, at this stage I’m more interested in upping the standard of my work – which can be tricky when you’re looking over your shoulder for the police (or the military). That stuff’s a blast but I don’t want to do it forever. I did come out of retirement for one last street job a while ago, though. I wanted author Steve Aylett – a much underrated genius – to read a draft of my novel. So I threw his images up in some pretty ambitious locations round town – a mission of heights, gales, rivers, hazardous structures and police. Haven’t had so much fun since the commando course on Dartmoor in ’96. I signed a contract for the book, but there are… complications. It’ll get out, but I never knew what a tough hide you need for the literary world. Graffiti art’s a baby pool by comparison.

What direction has your legal work taken you?
Well, I practised at the bar in 1912 under a pseudonym taken from one of Dickens’ novels but I’d better not- Oh. You mean my legal artwork. (Heh.) I’m just getting back into art, having sworn it off a few years ago. I’m enjoying exploring different techniques and media. I like the discipline of stencils but they’re ultimately restrictive; it’s nice to draw without thinking, “how will I physically cut this out?” Drawing’s always been the basis of my stuff anyway; I never used photos. But now I draw better.

Are you doing commissions and stuff like that?
Yes, from time to time. I’m currently illustrating a children’s book about dandelions, of all things. (Times change…)

Got any shows planned?
I’ve talked to a couple of places but don’t want to rush in. I’ve made mistakes before and learned to be cautious. There was talk of doing something in a converted Hackney warehouse, but it was to be curated by a balsa-wood effigy coated in warm marmite with cunningly-woven filaments of ruby for eyes and a belly that rings like a bronze gong in the earth’s core, spewing magma when beaten with pig’s bladders by banshees fashioned from wet hemp. It looked promising. I got cold feet at the last minute but I’ve one or two other irons in the fire. (One’s for branding images onto sheets of hanging skin. Heh! Hanging skin…)

Where can we see more of your work?
Well some say if you walk through a New Cross tunnel on a moonless winter night the ragged walls ooze Montana spray paint and the ghost of my images seem to hang in the mist… And there’s also my site.