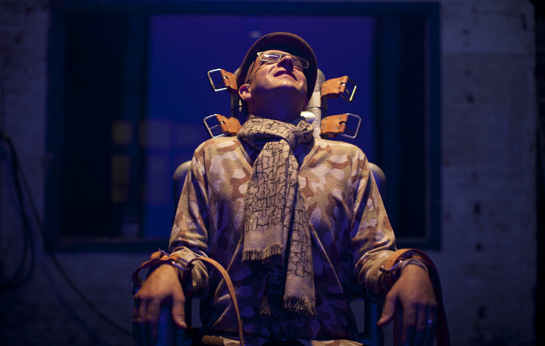 Steve Lazarides is one of the biggest players in the art world. A self-made man, he’s got a bunch of galleries in London and across the country and he is also responsible for the amazing Bedlam show currently in the Old Vic Tunnels, which ends on Sunday. Josh Jones rang him up to have a chat about what’s going on.

Tell us about the show.
This really is the best one we’ve done so far – which is good because it’s definitely the last one we’ll do in this venue. It’s based around Bedlam the institution and bedlam as a word. If you look it up in the dictionary it says chaos and pandemonium. Which seems to work with what’s going on in this day and age. People really got into it – the artists really got behind it. There’s a lot more technology and it’s a lot more interactive this year.

Why the Old Vic Tunnels?
We agreed to do three years here. It’s a great space to work in. I really like it. But three years is definitely enough. There’s only so much time you can spend in a dark, dank tunnel, so I feel I’ve done my tenure.

Is Bedlam a nod to the the asylum around the corner?
I think I’m right in saying that the original site of Bedlam was the old Imperial War Museum. It’s been open for a lot longer than people think. I think it opened in something like 1247 and it never closed. It got absorbed into another mental health trust. I think you’ll find that the whole thing is still operational, just in a different guise. The old Bethlehem hospital is still open. It’s one of those weird things that was owned by one family for something like 400 years and they were ones that pioneered the ‘pay a penny, come look at the mad people.’ Different artists really explored the theme in different ways. Some of them went for the mental health tip and others went for the chaos and pandemonium side of things. It was interesting to see how they interpreted it. It’s something like 29,000 feet down there so you need a lot of stuff. It’s also why we’ve used a lot more video and installation pieces than we would ever use in a normal gallery.

How long does a project like this take to set up?
A year, really. The Bedlam idea I came up with a long time ago. Getting artists to do proposals and going back and forth with everything all takes its time. To be honest, just before you called, I was stood chatting with the guy I put the show together with discussing what we’re going to do next year. The minute the doors are open we’re thinking of the next one.

How do you find the time to get new artists involved?
It’s weird. There are certain spots that are given to certain artists and then I tend to leave it open to a degree so I can pull in things that have been suggested or things I’ve seen that I like. One guy came to me with an idea two weeks before the show and I thought his idea was brilliant so I thought ‘Fuck it, let’s stick it in.’

What’s your favourite piece of art ever?
My favourite piece ever? It’s got to be the white on black Antony Micallef head that I’ve got hanging in my house. Actually, there are two pieces – the Micallef head, which I think is the best thing he ever did and I helped fund JR’s project in the favelas and in return he gave me a lovely picture of one of the street kids on a piece of corrugated iron. On a personal level, those are my favourite pieces.

What’s next for the Lazarides Empire?
Sleep! I’m not sure, the website at the moment, The Outsiders is something we’re putting a lot of time into as well as we’ve got a 5,000 square foot print studio in Wapping. So as well as the high end stuff with Lazarides, we’re also going back to the affordable art side of things with theoutsiders.net.