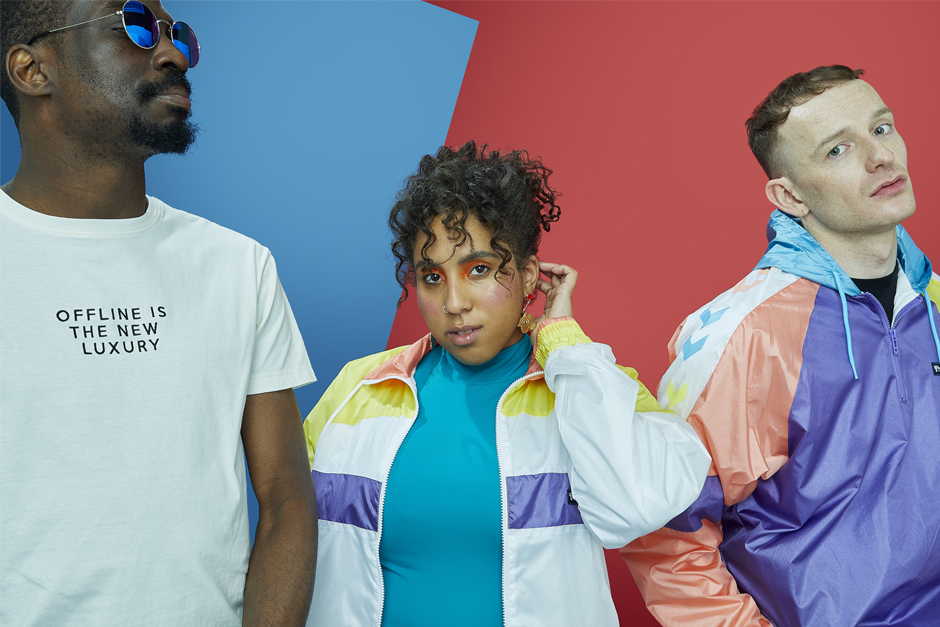 London-based three-piece Benin City, comprised of vocalists Joshua Idehen and Shanaz Dorsett and multi-instrumentalist Tom Leaper, are sick to the back teeth of their favourite late-night London spots closing down. So mad, in fact, they’ve recorded their latest album about that very thing. The album, ‘Last Night’, is an ode to this fantastic city and all the shenanigans we get up to in it – it’s a beautiful soundtrack to how we live and how precarious that can be. ‘Last Night’ is out on Moshi Moshi Records on 15th June.

What sparked the idea to record an album about the disappearance of London’s clubland?
Josh: Tom and I made an EP, ‘Midnight Marlarky’, in 2014. A sliding-doors narrative of a single night. That got us talking about our nightlife stories in the noughties as Tom was familiar with Soho and I’d cut my spoken word teeth in East London venues; we wanted to make an album that was a celebration of the little parts of London we grew up in. As it turned out, a lot of the venues we were talking about – Vibe bar, Plastic People, Bar Music Hall – had disappeared, so that became another narrative within the project.
This new album is an ode to London’s night life – it’s also kind of an obituary too. How did you avoid it being a melancholy record?
Tom: Between three of us we touch base with various scenes around London all of which have been affected by the numerous venue closes around the city. Pretty much all the places that we used to go out to in Soho when I first moved to London are shut. Crossrail tore through Soho and buildings were knocked down. Some bars tried to make a go of it in East London but you can’t uproot a scene like that and expect it to thrive elsewhere.

How did you manage to channel your anger into the recording of the songs? It’s hard to keep a rage on your 15th take…
Shanaz: Londoners have always used clubbing as an escape from the struggles of living in the city, so it felt necessary to capture the politics of nightlife with sounds that still paid homage to bass music, felt danceable and could get an audience feeling like they were raving when we perform it.  In one Saturday night out you could lose your phone, get in a fight, then meet the love of your life within a few hours, and the album sounds like the soundtrack to those experiences.
Josh: I drink a lot of sugar. I’m not joking. Also we were on a tight budget so ‘All Smoke, No Fire’ was done in one take.

Which track off the new album sums up London the most for you?
Tom: ‘Midnight Malarkey’, which was the EP that sparked the album, had a duality to it. Great versus a terrible night out. We took that same idea to the album process. We always have the idea of it being a vinyl LP and as you flip it over to play side B the concept becomes clear.
Josh: For me, ‘It’s Not The End’ sums up a lot of post 3am shenanigans for me.
Shanaz: ‘All Smoke, No Fire’ feels like the theme tune to most conversations I have with my friends. We are caught between wanting to have a great time and feeling anxious about being priced out of the areas we grew up in.
Tom: ‘Bus’ conjors up memories of many great night bus journeys home. Sometimes the best part of the night was the hang on the bus. When I first moved the night bus blew my mind. Haha. No more cab fees. Instead a couple of quid to get all the way across London leaving you more to spend in the club. Even though it took two hours or more sometimes, it was worth it. And, what is more London than a red night bus with all kinds of people colliding from their very different nights out? Some people coming home wasted from after work drinks. Some people catching the night bus across town to GET to the club. Some people going out late to work at these places.

Which venue do you miss the most and why?
Josh: Passing Clouds. Nuff Said.
Shanaz: CAMP on Old Street and all the sweaty hip hop raves.
TOM: Ghetto in Soho. That place was the gay scene that I had hoped for when I moved. And every night was different. It wasn’t cheesy or tacky like every other gay club I’d been too. It was grubby and rough around the edges and the people in there were just different to the other bars and clubs around it. GAY was around the other side of the Astoria and the people in there were welcome to it. Ghetto was where it was at for me.