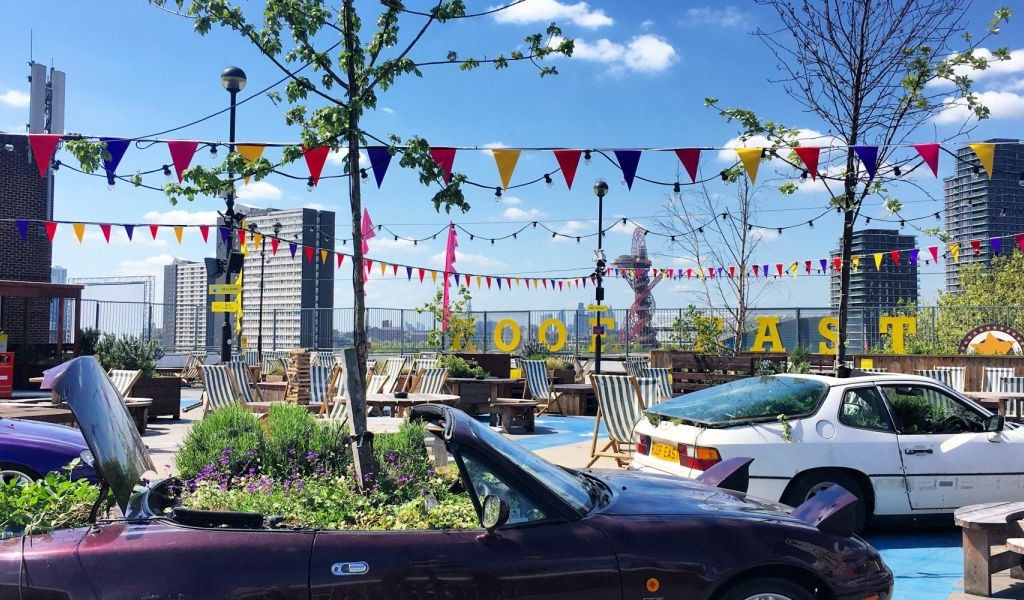 Hey kid, do you wanna get high?

So the sun’s out and you wanna get as close to it as you physically can – we feel you. Now we all know drinks taste better on a roof but your aerial aspirations don’t have be quite so basic. There are a whole heap of other activities that we can do on roofs in London. Here’s a little round up to keep you lifted and lofty all summer long.

Piculpeper
The roof at The Culpeper is galaxies ahead with its utilisation. Used primarily for growing veg (look out for the 8ft pickle in the cucumber garden), as a workspace and for hipster doggo spotting, it also plays host to Sketching the Skyline and Rooftop Astronomy workshops complete with super tech telescopes and biodynamic wines.
40 Commercial Street, E1 6LP Tues – Sat 11am – 10.30pm, Sun 11am – 10pm Skylight
Skylight is bringing the cutesy lawn game/activity/sports vibe to this party. Play croquet or pétanque, or guzzle cocktails and munch burgers from Flip Side as you watch other people sweat it out at the World Cup and Wimbledon screenings.
Pennington St. Car Park Entrance, Wapping, E1W 2SF Thurs – Fri 5pm – 11pm, Sat – Sun 12pm – 11pm Summer of Sound on the John Lewis Roof
If for some God-awful reason you find yourself pounding the pavement of Oxford Street in the height of summer know that there’s an oasis waiting in the clouds. John Lewis has partnered with Sonos, Naim Audio, FeverTree and Butchies to create a delectable dalliance for all of the senses. Immersive studio spaces, live music, DJ sets and G&T masterclasses make this a hella sought-after space – so book events in advance or arrive early to avoid the disappointment of having to return to your shopping.
John Lewis, Oxford Street Sun – Weds 12pm – 9pm, Thurs – Sat 12pm – 11pm Dalston Roof Park
If you’re looking for more of a thumping-bass-hedonistic-club-night vibe then Dalston has the roof for you. With raves, solstice parties and carnival celebrations, Dalston showcases heavyweight and up and coming DJs spanning all genres. They also do Saturday a.m. classes with Fat Buddha Yoga cause, you know, balance.
Dalston Roof Park, The Print House, 18-22 Ashwin St, E8 3DL Mon – Fri 9am – 3pm, event times vary Rooftop Film Club at Bussey Building
Hunkering down in a blacked-out cinema just doesn’t seem right this time of year. As the days get longer and the evenings brighter, get your film fix at the rooftop of Bussey Building instead. Rooftop Film Club has created a transcendental cinema experience featuring wireless state-of-the-art headphones, tipples and bottomless popcorn. Choose from the roster of hand-picked films and settle down in a comfy deck-chair to enjoy the panoramic sunset as the opening credits rolls.
Bussey Building, 133 Rye Ln, London, SE15 4ST Rooftop bar: 5.30pm – 11pm, films at 9pm Vijay’s
A sneaky new bar near Tottenham Court Road, Vijay’s celebrates opulent decadence in decor and in cocktails made with as much theatrics as booze. They have a small rooftop terrace with a glass floor viewing down to the restaurant below. A cool little lesser-known roof find.
93, Charlotte Street, Fitzrovia, W1T 4PY Tues – Sun 5pm – 12am Woodberry Wetlands – Coal House
When you need to escape the city but you just aren’t willing to travel more than 6 stops on the tube, Woodberry Wetlands is king. The Coal House café has a cute roof terrace on top of its Grade II listed frame, allowing views of both east and west reservoirs, and all the nature and little critter-spotting you can possibly handle.
West Entrance via New River Path, Lordship Road, N16 5HQ Mon – Sun, 9am – 5pm Roof East
Find Roof East on the unlikely rooftop of the (slightly jaded) Stratford Centre. It’s a circus-themed playground for grown-ups (and kids on weekends before 5pm). It’s got bars, bowls, batting cages, crazy golf and a great view of the city across the Olympic park. Excellent for a sunset drink with friends, you might want to have a snack first as there is only one food kiosk and it was packed when we visited.
Stratford Multi Storey Car Park, Great Eastern Way, E15 1BB Tuesdays- Fridays 5pm- 11pm; Saturdays- Sundays 12pm- 11pm

With contributions from Angie Christiansson and Chloe McCloskey