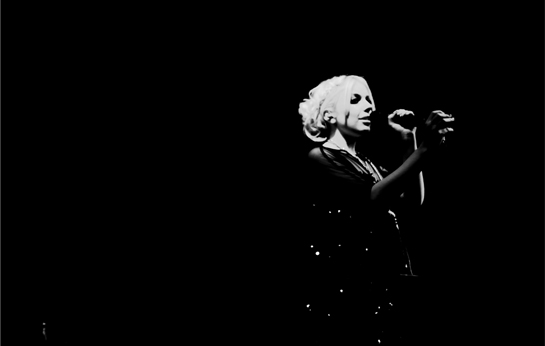 Electro-synth queen Little Boots had literally just landed back in London from her monster world tour when Josh Jones spoke to her. It’s kinda handy that she’s back in town as she’s got a launch party for her latest single this weekend.

Hello Little Boots where are you in the world today?
I’m currently on an Air China flight from Beijing to London. So far I have decided the food is slightly superior to Virgin Atlantic but the film selection is unfortunately rather limited.

How was your world DJ tour? What was it like?
Tiring! Fun. Lots and lots of fun, so much alcohol/coffee/Red Bull, not enough sleep… I feel kind of spaced out right now, I’ve been through that many time zones. But it was great to go to so many different places and see people all over the world react to my songs, especially the new single Shake… it’s amazing how quickly things spread.

What can we expect from the new album?
I’m not entirely sure yet until it’s finished, probably around 11 or 12 tracks that will more than likely involve vocals and possibly some synthesisers.

Will there still be laser harp and Stylophone musings?
Since a laser harp is actually just a midi controller and doesn’t make its own intrinsic sound it wouldn’t really make the greatest sense to record using it so I’ll have to say no on that one. As for stylophone — not yet, but I’m sure there will be some equally interesting noises somewhere along the way.

How do you do what you do?
I’m afraid I don’t entirely understand this question! I guess that as what I do has so many different parts to it there is no straight answer. Lots of talking/worrying/tea drinking, occasional eureka moments.

You’ve worked with James Ford on your new single SHAKE. What has he taught you about the music business?
We didn’t really discuss the business too much, we mainly focused on the music, I find if you let the music business into the studio too much it can be quite destructive. James is amazingly talented and one of those rare people who is not only very musical and sensitive to using the right sounds in the right places, but is also an amazing artist and DJ in his own right so I think coming from all these different angles really brings something unique to the table when writing and producing.

Just like me, you studied in Leeds — did you ever do the Otley Run? I never did.
Haha yes very much guilty! I definitely did it more than once, I think the most embarrassing occasion was dressed as a playboy bunny. Oh dear.

Where’s the best place in the whole wide world?
Possibly having a bath in the Park Hyatt hotel in Tokyo (the one from Lost in Translation) looking out over the city. But probably my house in east london beats that, especially when you’ve been travelling for a while. Right now I can’t wait to get home. Partly because I have a party to get to on Saturday!