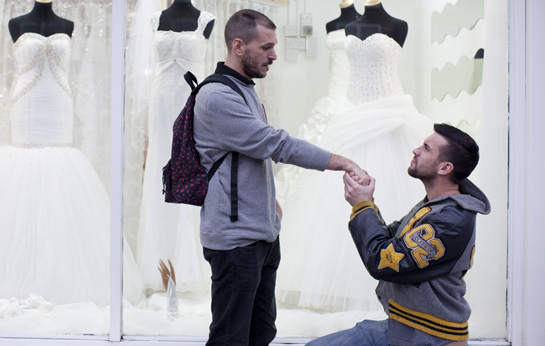 Little Gay Brother is one of London’s newest and most fun nights. Trust us… it’s ace. It’s hosted by Dave – a time travelling space unicorn for one thing and there’ll be more glitter than you can shake your thing at. Add to that awesome music, a wedding service, free entry to anyone dressed as a bride and a special area to hook up with people if you get your heart broken and you’ll start to see why everyone wants to go. Started at the Secret Garden Party this year, Little Gay Brother, which’ll be in Dalston this Saturday, is bananas. Josh Jones spoke with two of the guys behind it.

So how did a unicorn end up in Dalston?
Clayton: It’s where he lives when he isn’t dancing on a rainbow and it’s the location of this week’s party at Dalston Superstore. It’s Dave The Unicorn’s local watering hole, full of pretty ponies, hung horses and the occasional Shetland. Give him a sugar cube and he is yours! Neh.

How did LGB come about?
Terry: He is the little brother you always wanted to have.
Clayton – He’s fun, carefree, uninhibited and a complete filth bag who doesn’t understand curfews. He is that little voice inside you telling you “just one more drink, just one more snog, just one more party”.
Terry: Secret Garden Party this year wanted to run their first gay bar. Something naughty, able to run wild and make an impact on the festival. LGBpresents was born there, in the mud. Dave The Unicorn is actually the compere of the Collosillyum and hosts their notorious mud wrestling. Together they make a perfect match. Dave actually orchestrated SGP’s first naked male cock tug of war with 16 guys this year in the mud.
Clayton – It was hot. If you like cocks and mud!

Is it actually true that you can get married at LGB this weekend?
Clayton: Yes you can. Father Ran-digga-dee-down will be on hand for any weddings, circumcisions, exorcisms, baptismisms and choir boy auditions all night. One sip from his communal wine, and you might end up filled with his holy spirit. He is really devoted.

Other than drunken wedlock, what else can we expect from you guys this Saturday and every other time your night is on?
Clayton: This weekend is wedding themed. We will have the wedding disco upstairs where we will marry you to anyone or anything. We don’t judge. You can marry your best friend, you can marry your boyfriend, you can marry your best friend’s boyfriend. You can marry yourself in a mirror if you want. As long as you invite us on your honeymoon for a good perve.
Terry: And if you don’t have someone to marry, head downstairs to The Broken Hearts Club to find your perfect match. Cock soup for all.
Clayton: Vibes upstairs will be disco, fun and silly. Expect a full on wedding party with the ‘Wedding Crashers’ taking over. They run Confetti Disco that you may have been to at Bestival.
Terry: Downstairs will be sexy with Chris Camplin, DJ Marro from Berlin and myself providing the music. It’s going to kick off.
Clayton: Anyone wearing a wedding dress gets in free.
Terry: In future the party’s theme will change every time. The next one will be on Australia Day at a yet to be announced location.
Clayton: Prisoner Cell Block H. I want everyone in cuffs.
Terry: We are also working on what we are doing for next year’s festivals. You will see BIG things from us on our return to Secret Garden Party and Bestival.