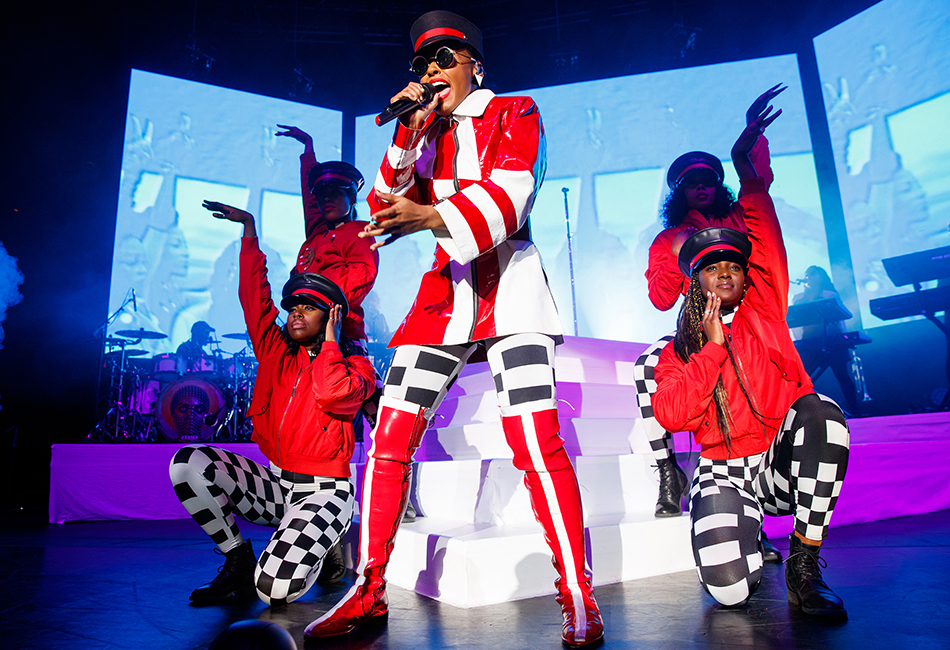 If you go to a gig in London then the person right down the front with a hat and a camera is most likely to be Burak Cingi. One of London’s top live photographers, he’s been to more gigs than you have. We thought we’d ask him a bit about what he gets up to in the pit.

Hey Burak, how are things?
Hey! Very good, thank you. Things are going ok, weather is dry, we are alive and I received these questions I have been waiting to be asked for some time now so what’s not good.

Just how many gigs have you been to in your career?
More than enough to mess up my posture and knees…1003. Or maybe 817. Somewhere in between.

So what are the top 5 gigs you’ve shot ever?
It is quite difficult to pick 5 from the 921 gigs I shot but I did Rina Sawayama the other night and she was mega superstar good, costume changes, dancers, confetti… Considering the atmosphere, stage presence, stage lights, shooting conditions and everything else, the first 4-5 gigs that come to my mind are Fat White Family at Electrowerkz, Sufjan Stevens during the Age of Adz tour at Royal Festival Hall, Janelle Monae at Roundhouse last month and Flaming Lips whenever they play. Basically if there is an excessive element of joy or chaos or a combination of confetti, balloons and unicorns I am sold.

What’s the most annoying thing about being a gig photographer?
Having to share the pit with the lead singer’s brother or similar standing in the prime spot taking pics with his iPhone and calling himself the bands official documenter. Also acting like you are the shit because you have a sticker that let’s you in in front of everyone but then gets you kicked out after three songs.

It is your curse. Have you ever taken one shot, know you’ve nailed it and repaired to the bar to congratulate yourself?
Unlike Ye I am super critical of my own work. I often feel, with very few exceptions, any photo can be better. If I catch a shot I believe no one else did, framed it well and caught it sharp then I may go “nailed it” or as I prefer it “got you mofo!” Then the next day I pretty much think the photo is not really that good. The struggle is real.

How often are live photographers a bit wobbly because they’ve had a few before the show?
We are all professionals. I can tell you with confidence that no one has more than two pints in the 20-30 mins between the bands and definitely not more than four before the show.

Is it a dog eat dog world in the pit or are you all very supportive of each other and help out with angles?
I think majority of us are friendly or tolerate each other. It certainly can get a bit cliquey sometimes; people who are friends will help each other more, like swap spots. Most of us thrive for a great shot but at the same time don’t deliberately try to fuck each other over. There are a few of those who hog the best spot and don’t move through out the show, or those who use their elbows or bodies to push others out of their way for sure but everyone knows who they are anyway.  Also sometimes there may be one person in the pit who lacks the etiquette or is not aware of it. Sometimes you deal with it there and then by pointing out the bad behaviour, sometimes you don’t and bitch about it for five minutes to five days and sometimes you are too tired to do anything and end up becoming that person because you know that if you don’t that one person is going to ruin everyone else’s photos including yours.

How do you prepare to shoot a festival? You’ve got a lot of bands and a lot of expensive equipment to worry about.
Clashfinder, festival apps, cigarettes and painkillers are my best friends during the festival season. I usually make a list of who I want to shoot each day using either the apps or Clashfinder. Then I try to figure out how easy or time consuming it will be to walk from one stage to another, whether I can do one song there and run to catch the next two songs here etc so there is a bit of timetabling and logistics going on there. I buy a pack of cigarettes on the first day because smoking cuts my appetite and not eating means not needing to have a poo, which of course is the worst thing about the festivals. Even in posh loos shit still smells like shit and you don’t really know what is in that chemical shade of greenish blue fluid splashing on your bum cheeks. As I tend to overdo and as carrying several kilos of equipment all day long is painful, especially if you are wearing boots, I pop an Advil just before I leave and it usually lasts the day and keeps the pain away. Cigarettes and painkillers are both bad, only do them at festivals.

Which festival has the best press facilities?
I didn’t do any of the dates this year but if it can be counted as a “festival” I am quite fond of British Summertime. Well positioned, super spacious press tent, fast internet, fridge full of drinks, a friendly and helpful press team and dedicated toilets. In terms of the traditional camping festival, I don’t do many of them anymore but I think End of the Road is very good. It has the cutest press cabin, a great publicist who looks after everyone, drinks and probably the fastest internet you will find in a field far away from big cities and towns. I was quite impressed with All Points East too.