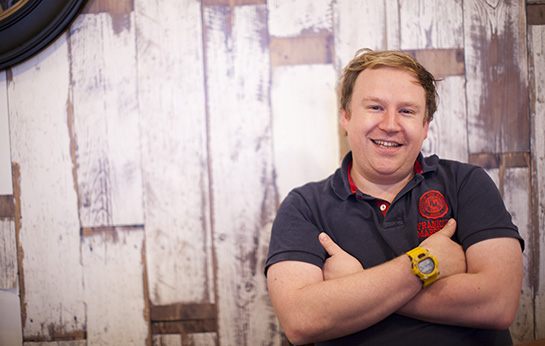 Ben Walton is the cheery guy behind the excellent Ben’s Canteen on St John’s Hill, near Clapham Junction. Josh Jones stopped by to ask him why his place is so good and his food so tasty.

So what’s the best bit about being Ben from Ben’s Canteen?
Being spotted and high-fived in the street for rescuing South West London from mediocre food and crap coffee. On a more serious note, the best bit is not being able to get any restaurant admin done because friends are always popping in, day and night. One of the reasons I started the restaurant was to have more human interaction; I didn’t want to sit behind a desk just emailing and tweeting any more.

What’s the ethos behind the place?
I want the Canteen to be an alternative to the pub. I love the relaxed atmosphere of a boozer but am bored of Sky Sports screens and tap after tap of crap lager… so I created a space that places more emphasis on people actually talking to one another whilst having some beers which taste great (we currently stock beers from small brewers such as The Kernel and Sambrook’s). I also love the comforting nature of food in pubs and the lack of tablecloths so I wanted to provide that and then I wanted to have really good British food which boasted ingredients and cooking techniques that you couldn’t readily find in SW London.

Do you have proper regulars now — you know, the kind that come in with a paper and a dog and don’t say anything except ‘Arfa pint’ every so often?
We have a good bunch of eccentric regulars, one who will buy a whole bottle of expensive wine but makes us keep it behind the bar in case his wife comes in — she lets him have a glass but not a whole bottle. We also have a chap who has scrambled eggs on toast with salmon but the toast and the salmon actually have to be on separate plates and a cappuccino, fluffy not wet (whatever that means). Oh and there is a chap keen on a shot of tequila with his morning coffee — punchy.

What’s the secret to getting a runny-middled Scotch egg?
Four minutes and 46 seconds and iced water.

I’ve heard your burgers are a bit special – who came up with the recipe?
They come from our head chef, Dave Ahern, he might just be a genius when it comes to meat. It was his idea to add a slice of homemade corned beef (which tastes nothing like canned stuff) instead of bacon and it’s amazing. It was also his idea to add a homemade burger sauce rather than a tomato relish, which most people do.

If I turned up with no top on, shorts and dirty work boots, would you let me in?
It would depend on if the staff thought you were hot or not. Let’s face facts though this is London not Ipanema Beach so the chances are you’d be on your bike, we like our moobs covered.

What’s next on the menu for Ben’s Canteen? As in what’s next for the place and have you got any new dishes on the way?
We want to keep developing the British theme, we recently added English wines, now we want to have a whisky shelf and a shelf with all the London gins. Food-wise, we just started a retro lunch menu (think chicken in a basket that you can eat) and there’s our take on a Ploughmans to add to that. For the dinner menu we’re looking at lamb with a nettle and mint sauce and some sort of fish with breadcrumbs made from pickled onion Monster Munch.