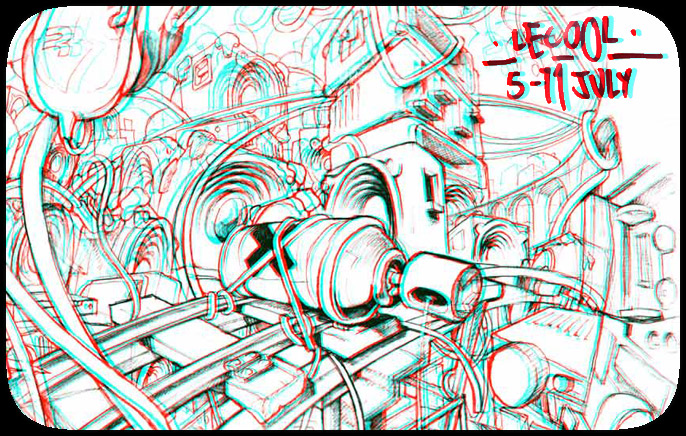 Awright there CHU? What’s going on in this cover then?
It’s a stereoscopic scene I drew in biro called ‘Cover Your Tracks’ – works better with 3D glasses.

So I hear you were painting at a festival in Birmingham last weekend? What did you paint? How was it?
Probably the best weekend I’ve ever spent in the Midlands – Mostly Jazz Funk & Soul Festival. I painted a 4m x 2m freestyle that I called ‘Ruderal Bombus’ which comes from the nice sounding latin name of our Bumble Bee. Ruderal means ‘to grow in wasteland’, thought it suited my concept of the city as a sound system.

What do you prefer – painting outside, painting inside, illustration or design? Because you do all of them.
I prefer to design an illustration that I paint on the sides of a lot of huge things, in 3D.

What do you think of the current state of street art then?
There’s way more walls to paint, but there’s not enough diversity. Things that have commercial success tend to be easier to replicate. Or should that be the other way round?

Is there anyone you’d really like to collaborate with?
Bricklayers and Sound Engineers.

What kind of music do you listen to when you work? I’m making my way through the Trojan Soundsystem story right now. I’m trying to fix the tinnitus I got from a gig last night.
It has to be funk/soul bangers and if it’s through headphones – Sennheisers. Anything by The Meters/P-Funk through to Dr Dre/Timbaland instrumentals. I have several thousand hours of recorded material through my childhood that I frequently check through too, just noises.

Where can we see more of your work?
‘See No Evil’ in Bristol is going to go off this year, massive things planned. Also Urban in Ibiza just before that. I built a website where you can catch the latest and see loads more work & videos, and some immersive 360 degree photography.