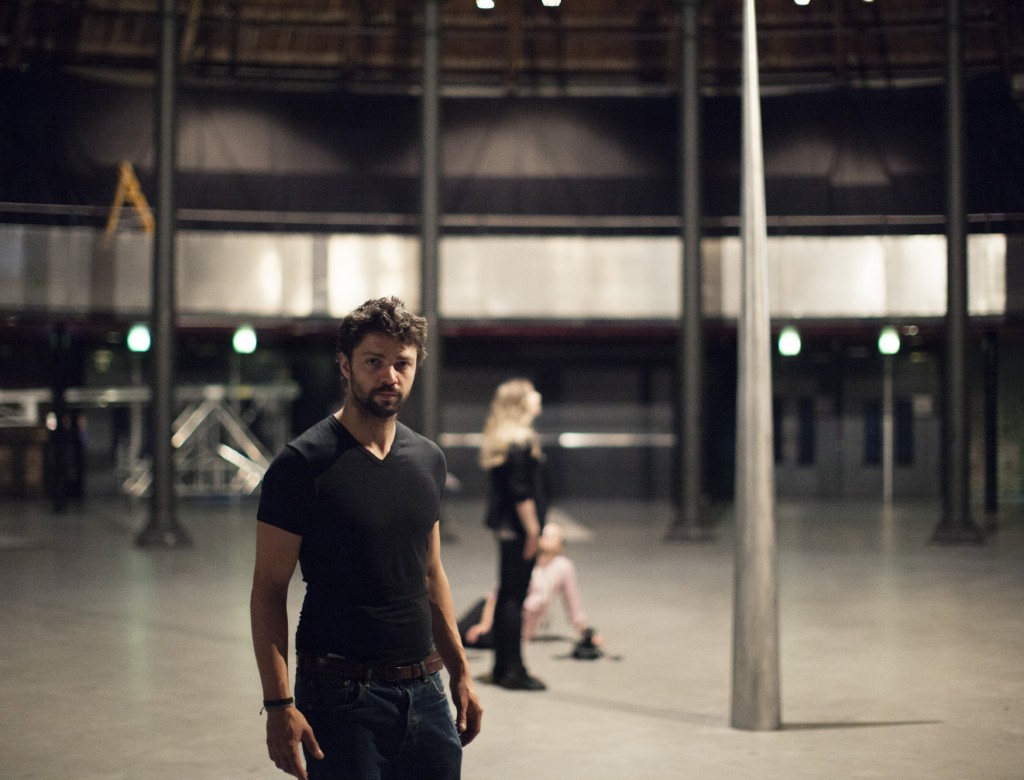 Conrad Shawcross is an extraordinary artist who uses scientific ideas and mechanics to create outstanding sculptures. This August sees an enormous time piece he has created installed in The Roundhouse. It really needs to be seen to be believed and luckily for us all, the venue is a running a ‘Pay What You Like’ to go and take a look. Josh Jones chatted to him last week, just as it was getting a bit panicingly close to the deadline.

Hey Conrad, how’s it going?
We’re still working on some bits, we’re not as finished as we’d like to be, but it’ll ok. We’ll get there in the end. It’s a pretty ambitious thing that we’re trying to do. Last week was looking more worrying than last week. We had a problem with the gears as one piece had been lost in the post for two weeks but we got it and were very relieved to get that. Because without one gear, the whole thing doesn’t work. I’ve been doing this for 15 years, making these kinds of systems, and no matter how hard I try and organise things in advance so we have a month of testing, it always ends up being a finished a few days before. But we’ll get it done, it’s going to be great. It’s been quite a build!

Did you have free rein on what to create at The Roundhouse? Why did you settle on making a faceless clock?
Petty much, I think it was a free rein. I guess it was free in the sense that if they didn’t like it, they wouldn’t have accepted it, but they seemed pretty happy with it from day one, so that was really good.

Why did you settle on making a ‘facelessclock?
I’m keen not to describe it a clock, because while I’m using some of the rules of time keeping, it is far more than that with what it will do to the space. It uses the clock as a starting point but it’s much more than that. The reason I chose to work with the clock and the idea of the index of the day was because of the 24 columns in the space at The Roundhouse. The number 24 doesn’t really have any other reference other than 24 hours in a day, so I thought I’d try and turn it around into this cycle.

Did you see the world’s oldest calendar may have been discovered in Scotland?
Oh wow – no. Scotland seems to hold all of these amazing ancient things. I know that they found some Platonic Solids there that pre date the Greek Platonic solids. It would imply that the Ancient Scots were aware of the Platonic forms before the Greeks were, which is extraordinary.

You include light in this and several other of your works – Counter point, Loop System Quintet, Machina etc – is it an important element for you?
Yeah of course. When you use a single lightbulb you create a radiant geometry in terms of the way it fills the space. It has a very celestial, primal feel with the shadows that it creates. I think it’s a powerful aesthetic. With earlier works it was very much about creating a wave of light using a single point that then extruded. This one is much slower even though over time with a time lapse you get arcs of light this is about time and about change and that gradual flux and turning the room into something that’s almost celestial experience. It’s turning the clock, which is a very every day, familiar object that we all know and use, back into something quite peculiar again and something quite cosmological. When you stand in the space, you’ll realise that you have become part of the sculpture and you’ll have these shadows that fall around you and grow and shrink.

What’s your time keeping like? Are you an early bird or always late?
I’m quite punctual. I’m always about five minutes late to meetings but that’s pretty regular. I have an awareness of time and can keep time, but I’m not a very good musician.