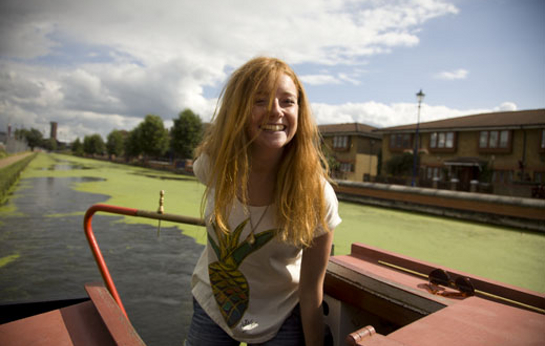 You’ll often catch this east London yogini doing sun salutes on the roof of her boat; perhaps giving thanks for the freedom afforded by continuous cruising. The pay-off for the independence of this sub-strata of London’s boating community is that they must move every fortnight; Ali and Gorse make their home variously between the filter beds at Walthamstow Marshes and Paddington Basin.

Having been together for just six months, it’s pretty obvious they’re deeply in love. The honeymooners don’t even get cross during difficult winter cruises, and still seem fascinated by each other’s foibles.  They welcomed us aboard at Victoria Park — with homemade vegan cake and a cup of chai — and took us for an afternoon’s cruising.

How long have you been a boater?
Only since December. I wasn’t very practical when I moved in. It was like starting fire from scratch, not just turning a button on. Thank heaven for being able to look stuff up on Youtube – tying knots, stuff like that!

Because each boat is so different, they’ve almost got a personality, and its like they enjoy playing tricks on you. And you ask someone and they go, ‘Mine doesn’t do that’. So you just have to figure it out for yourself.

Did you give Gorse her name?
No I didn’t, she came with that name, but Gorse is a yellow, Scottish wild flower, so I thought that was quite appropriate. And apparently it used to be used medicinally to treat people who had lost hope with life.

Cost-wise, can you compare boating with renting?
It’s so much cheaper! I think it’s more the bills that make it cheaper. Gas usually lasts me six or seven weeks for a canister, which takes care of my water and oven, and that’s just £23. And then your fuel: the tank’s 170 litres; it lasts about six months and costs £150.

Do you ever get boat envy?
A little bit. I’m really happy with Gorse, cos for me it’s tonnes of space and she sort of suits me. But then sometimes I see a wide beam, which is like a narrowboat but twice the width, and I see inside it and they’ve maybe got a sofa or a proper dining table, and I think, ‘Ooh, I could do with that!’ My neighbour in Hertfordshire had a 60ft boat, so with that extra bit she built a proper walk-in dressing room! On a boat? C’mon, that’s brilliant!

Is there any downside to this aquatic utopia?
I suppose in winter it might get a bit tiring and cold standing at the back in pissing rain, and having to move every two weeks. Whereas in summer it’s really nice because I feel like I’ve discovered bits of London that I didn’t know existed. And you get to see things from a new perspective; when you step on the canal, it’s a totally different world.

What’s the best boating boozer?
It has to be the Palm Tree. It’s down near Mile End, and it’s the place most boaters go to drink. It’s all old and dark. They have this huge cash register with the big buttons, and all the boaters sit outside on the grass.

What’s the most valuable thing that’s been overboard?
iPhone, once. And keys, I dropped the keys in once. So I need to get a cork key ring: that shows you’re a real boater.

[Listen to Ali talking about her overboard adventures.]

You’re a yogini: is there a boating type?
Ha! There are quite a lot of yoga teachers and people who work in alternative therapies and things. And there’re a lot of actors and musicians — I haven’t really seen anyone suited and booted leaving in the morning. Because it’s quite an affordable way to live, if you do want to do a job that’s creative or enjoyable but doesn’t pay a lot of money — it’s a way to have your own space and still have a nice lifestyle. And meet really like-minded people, which is the big thing, isn’t it?

Have a look at Ali’s blog about yogic boating.