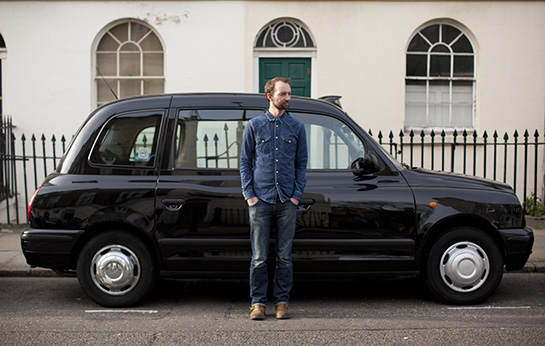 Chris Pattinson along with friends Jono Stevens, Will Evans, Jonny Madderson and Gen Steven, are the people behind the Black Cab Sessions – the hugely successful web series that’s now on Ch4. Josh Jones managed to catch some time with a slightly jetlagged Chris, who’s Director of Music for the Black Cab Sessions after they’d returned from a tour of the USA.

What are musicians initial reactions when they realise they’re playing in such a small place
I think now that we’re slightly more established, the bands tend to know what they’re signing up for. However, its always interesting figuring out setups and what will work best. Because of the limitations, it forces bands to think about how they want to perform and get creative with their setups. This leads to some really original versions of songs that you don’t get to hear on record.
So sonically you get some really interesting interpretations of songs, and visually it’s an extremely intimate viewing experience that really engages the viewer.

How do you get such massive names into the back of your taxi?
I think everyone who takes part see’s it as an interesting alternative to a lot of other things they get asked to do.  For us, the sessions are all about putting the big with the small. The fact that Jack White took part is just a big an achievement for us as filming first performances from complete unknowns such as Lianne La Havas or Michael Kiwanuka. Whatever their status, they all have to deal with the same environment and be able to perform in the limited space. The ones who are able to do that make it onto the website and get seen by a whole heap of new fans, which makes it a very worthwhile thing for bands to do, whether established or up and coming.

Do you really hail them or do you lease your cab or are you part of that elite group of non-cabbies who own black cabs, like Stephen Fry?
We hail a cab just as anyone else would. The fact that we’re standing on the street with Feist or Rufus Wainwright makes it a bit more interesting but ultimately, we’re still passengers that will pay the usual fare…! Using different cab drivers is the ultimate promotional tool for us – these guys are great for word of mouth and the fact that we have them introduce the sessions makes for a lovely montage of characters.

Have you ever driven through town and just given someone a lift?
We can act as a cab service. When we filmed Brian Wilson, we picked him up from Abbey Road and took him back to his hotel. All he had to do on the way was give us a couple of songs. Useful for him as he got back to his hotel, and great for us as we had one of the most intimate concerts with a Beach Boy ever recorded.
Our Black Cab Sessions USA series features a lot more spontaneity in terms of who we pick up and film. We focus on an established artist from each town who in turn introduces us to who they think are the next upcoming act from that city. For example, in our Nashville episode, Jack White performs a song with Wanda Jackson in the cab and then tells us about a new guy coming out of East Nashville called Pujol. We film a session with Pujol and he shows us around the city and the spaces and faces that have helped him get his music out there. It’s a great way to discover the cities, using local knowledge of the bands that give the place its musical pulse.

How did the Americans take to the Black Cab?
We were amazed by the response of the US bands. We managed to get some pretty big names involved such as Jack White, The Roots, John Legend and Wanda Jackson. I think they enjoyed being part of a concept that many of their friends had done before them and they wanted to try their hand at it too. There were a few confused faces driving down places like Frenchman street in New Orleans or the outback of Georgia, but all in all everyone loved seeing this strange car whistle by with a band playing in the back of it!

What has been your favourite Black Cab session?
I have many. Each one is completely unique.  I think Champagne Champagne took the whole concept to a new level and showed that we’re not just about guys with beards and guitars.
There are five of us at BCS and we all have very diverse music tastes, so it’s important that the sessions reflect all genres of music that we like. We have featured hip hop, folk, classical, electronic, spoken word etc so we’re trying to cover most things. We’re all about music discovery.  Our aim is to showcase the best music we can from all parts of the world. I really want to take the cab to South America, China and Africa and be like a modern day Alan Lomax, discovering indigenous music from these places and giving them a platform to a wider audience. However, we will always continue to film in London and put the established bands on the same seat as the upcoming acts.