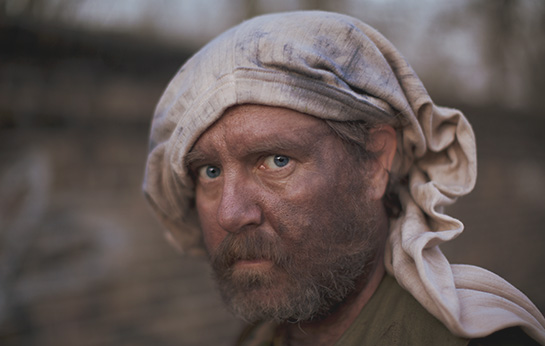 Mark Davison is a fantastic comic actor/stand up. You may well have seen him on BBC3 and all over YouTube. Right now he’s being very, very busy doing filmed things and quiz shows and standing up. Josh Jones had a chat before he went off for more filming and standing up.

Is it dark where you are?
Right now, yes. I’m sitting in the basement of Benny’s Bar on Bethnal Green Road, waiting to go on stage as my Stand Up character – a confused alien called Mr Susan – at “The Painted Grin“, a lovely comedy night run by Oli Bettesworth and his partner Jayde Adams.

Did you get into comedy? Or did comedy get into you?
I’ve always been into comedy. My father is a magician and is always being brilliantly silly, which inspired me from a very young age to cock about. My school reports were always very mixed since although I was fairly good academically at most subjects, there were those teachers who appreciated my sense of mischief in the classroom, and those who saw me as a disruptive influence. By the time I got to university I knew I wanted to be a comic actor, which seriously annoyed my director of studies such that he described me (in print) as “embarrassing and utterly unintelligent”. Helluva thing to write about a 19 year old! I’ve been a professional actor now for 18 years and although I still do the occasional serious role, I have far more fun as a comic actor. And then I took the plunge and tried Stand Up two years ago and since then I’ve not looked back, especially once Mr Susan came along about a year ago.

When’s rush hour in a comedian’s day? Do you feel like you commute to work?
I make a point of never rushing anywhere. I feel supremely blessed to be able to be able to avoid anything approaching a commuter rush. When I’m writing new material I walk for miles and miles, talking to myself, going through it and refining it out loud. I guess that’s the closest I get to travelling to work.

What are you up to at the moment? I heard you’re filming something.
The last 12 months have been brilliant and the roles have finally started to come in thick and fast. I played the title role in “Jesus’ Party” just before Christmas (it’s on YouTube, though not for the easily offended), and I’ve done numerous sketches for BBC3′s “Feed My Funny” (the sketch “Young Girl” has over 1 million hits). The photo attached here (taken by the brilliant Tom Medwell) was from my most recent film – “They Call Me Clifton (Monster Of The Marsh)” – about a man who lives on Hackney Marshes and believes he’s tracking a monster. It’s written and directed by Michael Byrne and was a dream role for me in that, although it IS a comedy, it has a rich vein of poignancy throughout. It touches on mental illness and homelessness and centres around someone who has dropped off society’s radar. It was a proper, hefty role and I’m really looking forward to seeing the finished film (it will be premiered at the East London Film Festival in April). Tom’s photo is me trying to recreate that iconic “Afghan Girl” photo taken for National Geographic all those years ago. Apparently there was a documentary recently in which a film crew tracked her down. The years of abject poverty had taken their toll and her beauty had all but vanished. Maybe a similar documentary crew will set out, years from now, to track down the filthy wreck that I became for “Clifton”, only to find that the years have taken their toll and I have been transformed into a stunningly beautiful little girl?

What are you up to next?
I’m filming a completely nuts satire on the forthcoming Olympics tomorrow (very early in the morning), which will be released on www.channelalright.com. And then there’s a big push for the Mr Susan vehicle “Cheeky Flippin’ Nice” which is an online game show (also made by Channel Alright). We’ve filmed some of the episodes already and they will be going live starting in April, although we have at least four more shooting days to go on subsequent episodes. It’s pretty mad, especially since the contestants are all enticed in from the street and have no idea what they’re letting themselves in for. My hour-long Edinburgh show this year will be attempting to recreate this game show format, albeit fully live and without the safety net of anyone being able to say “cut” and let me do the last bit again.