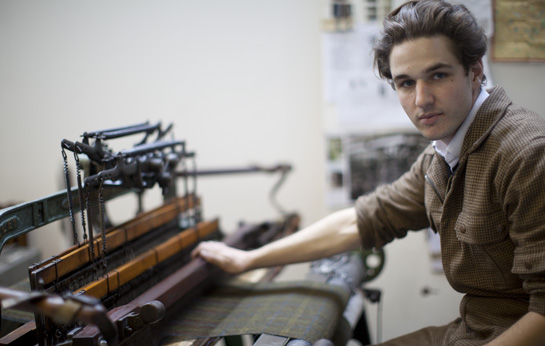 Daniel Harris is the brains behind one of London’s only micromills — the London Cloth Company. He’s restored old weaving equipment, gleaned advice from the, shall we say, elderly masters of the loom, and is making his own tweed. And look at how well he dresses. He’s taking it properly old school. Josh Jones had a quick chat.

Is there any connection between you being called Daniel Harris and making tweed and Harris Tweed?
None whatsoever; it’s just a coincidence. The Harris trade mark was first established in 1906; Harris tweed can only be produced in the highlands by islanders. We just make your common household or garden variety of Tweed. I did contemplate for a little while calling the company Daniel Harris Tweed, though I may have encountered some legal problems! We can and do make classic tweeds and checks, but we’re particularly interested in experimenting and playing around with the traditional techniques and designs to create something different, something unique for that client.

Do you have a favourite piece of machinery? Y’know, that you look at fondly and say goodnight to when you leave for the evening?
We just moved a three-tonne loom 700 miles. It was on the third floor of a mill. I had to hire a crane to lift it out of the building. That was after some of the roof had been taken off. Then it had to be broken down into smaller bits to get it to the new home. So yes, you cannot help but develop a bit of a relationship with these things. It is often very much a love-hate ordeal, they are all old and very erratic. They will work brilliantly for hours on end, and then all of a sudden stop, for no apparent reason, even though nothing has changed. First I try a few different things to fix it, Then I go mental and start dismantling parts. Then realise it was something else in the first place. There is no standard setting or immediate answer, just a lot of tweaking. If I didn’t love it, I would have given up a long time ago. If there was a creative swearing event at the 2012 Olympics, I would represent Great Britain.

Overall, the satisfaction outweighs the frustration, some of the looms have been built entirely from old parts accumulated from all over the country, and these are possibly the best. There’s certainly a lot of pleasure in putting a machine together and seeing how every little mechanism works; they are remarkably complicated in their simplicity.

Do you have old school apprentice lads (or ladies) turning up in cloth caps and brown jackets? Or are you on the lookout for some?
I have several glamorous assistants/skivvies, though they thwart my attempts make them wear brown warehouse coats, cloth caps, eat pies and take dogs around on a bit of hairy old string.

What’s the best thing about doing what you do?
Although much of the work is at times monumentally mundane, fantastically frustrating and tremendously time-consuming, it is also sensationally satisfying when I see the cloth building on the loom, and getting finished fabric back from the finishers. I honestly think it is the nearest thing you can get to magic. I love it.