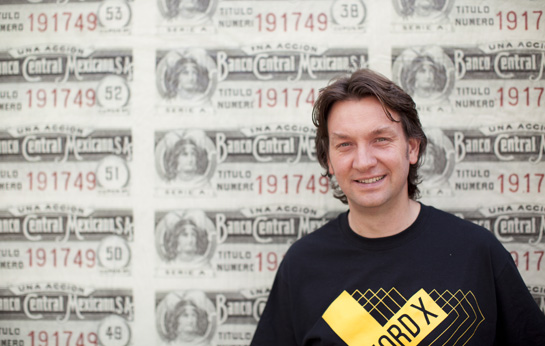 Matthew Couper is the project director of the contemporary arts festival, Deptford X. The festival, which has showcased work from some of the most exciting artists in the world, has been keeping this corner of London town contemporary for some 15 years now and Matthew was kind enough to take a breather and have a quick chat with Josh Jones.

Hey Matthew – Can you tell us a bit about the whole Deptford X project and the events you’ve got going on?
Hi le cool, it would be my pleasure. Deptford X is London’s contemporary art festival. We aim to showcase the best in contemporary art and share that work with the widest possible audience. This is why so much of our work is in the public domain, where everyone can access it. So this year we have work around Deptford train station, as well as a butcher’s, a baker’s and if we had a candlestick maker’s it would be in there too.

The biggest piece of work we have is a new installation by Hew Locke on the outside of Old Tidemill School, which I have to say, looks pretty impressive.

As well as Hew we have four other headline artists, Dzine, Doug Jones, Henna Nadeem and the Hidden Noise. However I think what gives us the edge is the 50+ fringe exhibitions and events, which are dotted around all over Deptford, not to mention the galleries and open studios that open their doors during the festival.

What I guess people might not know is that Deptford X is London’s longest running contemporary arts festival – how do you keep it cutting edge?
It all starts with our lead artist, we aim to work with cutting edge artist like Hew Locke & Mark Titchmer and they kind of lead the way by bringing in up and coming artists that they have met. Also, we don’t put down too many rules or obstacles for the artists. We simply say Deptford is your canvas. If you want to put work on the side of a building, or on a refuse truck we’ll try and make it happen.

It started in 1998, which is when I worked as a cargo handler at Stansted Airport and had blue hair. How times have changed – how’s Deptford X changed?
Haven’t they just? Deptford X was this great idea that caught everyones imagination. The first director, Reuben Thurnhill had to work his socks off to get it going and making sure it stayed afloat. He was able to get hold of some great artists – Chris Ofoli, Bob & Roberta Smith, Spencer Tunick etc. So we have always tried to get the best artists. The biggest change has been that in the early days there were lots of empty warehouses we could use; now a lot of those spaces have been taken so we’ve moved work out in to the streets. Like your hair we’ve tried to stay true to our roots.

I’m guessing a lot of our readers might not have sampled Deptford – where are the best places for them to visit?
The great thing with Deptford X is that where ever you land in Deptford there is something to see. Naturally you have to take in Hew Locke’s work on the outside of the Old Tiemill School, just to see the sheer scale of the work. To help get people around we have a map on the website, which you can also
access on the phone. Maybe some of your readers will be watching the equestrian events in Greenwich Park and afterwards are going to be waiting ages for a train, the great thing with us is that you can walk from Greenwich Park to Deptford or New Cross train Stations, or Deptford Bridge DLR, avoid the queues and see some great artwork.

I went to the Deptford Arms once and they were giving a free Pina Colada to the first 50 people in that day. Does that still occur?
One of the tragedies is that the Deptford Arms is no longer with us; it’s been turned into a bookmakers. I often wonder if the natural way of things is banks to become trendy wine bars and trendy wine bars become bookmakers, one can only hope that bookmakers will turn into spaces – maybe a future Deptford X project.

Although the Deptford Arms isn’t with us there are still lots of great places to get food and drink. The Big Red is a converted bus serving Pizza, the train carriage café is a popular venue in the heart of Deptford, then there’s Deli X (guess where they got the name), the Creekside Café, Panda Panda, the Albany and lots of other places besides. I believe our lead artist Hew Locke, is a fan of the Tandoori Express.

So there are no free Pina Colda’s, just lots of great free exhibitions.