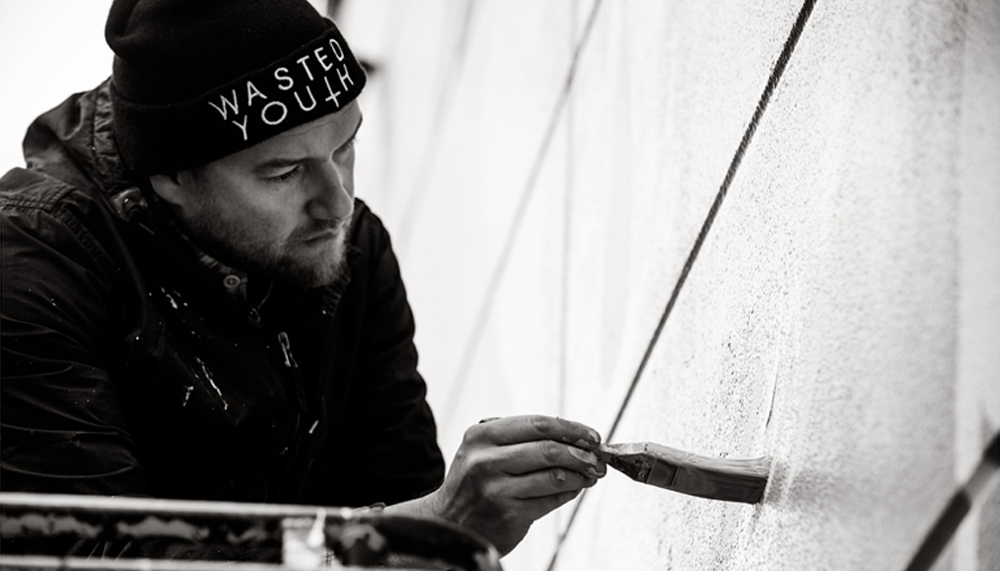 One of the world’s most prolific sticker artists, huge mural specialist and stalwart of the street art scene, D*Face is showing (and selling) his work at the Swizz Beatz-curated art-fest-shindig, No Commission from 8-10 December. Previously appearing in Miami and the South Bronx, the contemporary art fair is descending on the The Arches in Soutwhark, showcasing a massive number of new and established artists, who are given their exhibition space for free and 100% of the sale of each artwork goes directly to them. Put on in collaboration with BACARDÍ, who are bringing live performances from the likes of Blood Orange and Lady Leshurr, Swizz’s shaking up the traditional art fair model, creating a unique, cultural experience for visitors.

How many stickers do you think you’ve stuckered? What’s the weirdest place you put a D*Face mark?
Haha, that’s a good question and one I don’t have a definite answer or way of calculating, but let’s say it must honestly be near 100,000, wait… that’s just changed to 100,001. The weirdest place, damn, that’s also hard. The Arctic Circle was pretty weird. The highest official capital in the world Quito, Ecuador also got the D*Face treatment, that was wild, but I just got back from Eleuthera in the Bahamas, which was literally like paradise, to be painting there where no one has painted for the public before was very, very rewarding and surreal.

Out of all your characters, who do you have the softest spot for?
The soft spot and I guess the only one that has persevered and been able to flex and move and be a regular reoccurrence is the D*Dog. The winged character that features to a greater or lesser degree in my work.

What did you learn when you became a gallerist?
I learnt very quickly not to become one. HAHA! Unfortunately I believe and love art and the movement I’m so much a part of, so it became quickly apparent I had some place as a gallerist in this world, representing it from the heart, for the right reasons.

Obviously New York is the grandaddy of the graffiti/street art scene but where do you rate London?
New York is for sure the birthplace of Graffiti as we see it and know it today, but I think the birthplace of graffiti would be original cave paintings by cave men and women. London’s position in this is without doubt being a hub for international street artists and developing what, before being given the term ‘Street Art’, was a few individuals experiments and paving the way with something that straddled graffiti but used different mediums within the public domain. One of those artists, a little known artist called Banksy, was instrumental in accelerating the scene into the public’s consciousness, and behind him was a very strong group of artist underpinning a global art movement.

When you first picked up a pencil could you imagine you’d be at places like Art Basel in Miami or No Commission later this week. Are you a ‘keep doing what you’re doing and good things will happen’ kinda guy?
NO WAY! I could never have imagined that I’d live, survive and support myself, let alone a family as an artist and moreover travel the world doing what I love, leaving my art in cities across the planet. It’s literally a dream – that doesn’t mean it’s an easy or a smooth ride, it’s not, but it’s a million times better than when I was working 12 hours a day in a job I hated, then working through the night on my own art. When I started there was no term for what is now called ‘street or urban art’ so it was a very pure, organic way of expressing myself and leaving my mark. Events like No Commission are testament to how far and how powerful the movement is. I’ve always believed in putting out good things, good vibes and positivity and hopefully good things will come your way, I’m pretty much heart led, sometime to my own detriment.

The whole street art world has changed a lot since you started out, not least because of things like Instagram making your work available to a global audience instantly. What advice would you give someone who wants to start a career like yours?
Street Art was the first art movement to use the Internet as a global window to showcase this art movement, when you make art in the public domain and applications like Instagram are fed from the visual environment, a never ending appetite for the ‘now’ and ‘new’ and public interaction, it’s no surprise its garnered such a strong global following.
My advice to anyone is that the streets are ours, go take them, public art has a truly positive impact in the world, we need more, not less, so I’d say go play, experiment, have fun and try to not sideways look at what other street artists are doing or have done, instead look forward and don’t even think of yourself as a street artist then you’ll bring something new and exciting to an already very exciting scene.