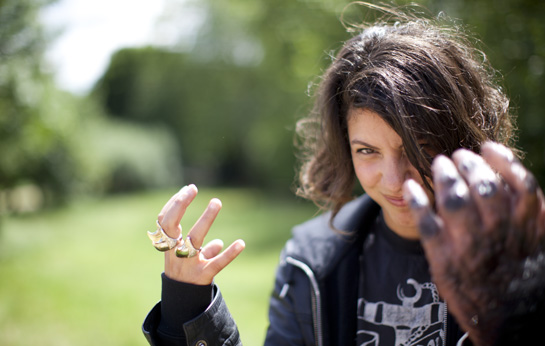 Zara Truss Giles is an excellent party maker. Not only does she put on some of the very best night’s you ever did go to, she’s also an awesome DJ and part of the Percolate dancers who you’ll often see traversing the world in incredible onesies with Totally Enormous Extinct Dinosaurs. She’s a super fun lady, has one massive hairy hand, did a special le cool mix for us and then she had a chat with Josh Jones before donning her flippers and heading to Secret Garden Party to play a set. She’s a busy ‘un.

Haven’t you just got back from playing at EXIT festival? And now you’re off to Secret Garden Party? How do you do it Zara? What’s your secret?
Yes Exit was awesome and yes! I’m DJing at the Pagoda Stage at SGP on Thursday at 4pm and I can’t tell you that – it’s a secret! But what I can tell you is this:
I have magical powers that enable me to be at any place at any given time. I’m also Robert Zemackis’ secret love child and biggest inspiration. Back to the Future is an autobiographical account on my early years… Did I just tell you my secret? I think I did! Ohh Dad!

Everyone knows that God is a DJ. FACT. What would you play if you got to open for him?
Oh WOW… I get to open for God? What’s my fee? I want my own island and those Kenzo Vans
that I reserved but were sold to someone else by “accident” and I want DJ Funk, Neneh Cherry
and Nelson Mandela to act as my hype crew, providing that can be arranged, I’d happily play him:

You know, a good mix between Heavenly Techno and Sexual Booty Bass, God deserves nothing less!

What would be on God’s rider?
I’ve just finished reading John Niven’s ‘Second Coming’, in which God is a massive stoner and loves fine whisky… what a dude… I’d believe in that! So, going on those lines maybe a nice spread of Hash Brownies, a few bottle of Mackinlay’s “Shackleton” Rare Old Highland Malt (now that’s a whisky!) And a whole lotta booty bouncing bitchias and vogueing Divas and a three course meal prepared by Keith Floyd.

Would you rather play a banger or a humdinger? Please show your working.
I want to play with Nile Rodgers hair!

That’s the best answer. Who doesn’t? What’s your favourite music?
Anything with excessive swearing preferably of a sexual nature.
Maurice Joshua’s – I gotta Big Dick is a classic. That and 20 Fingers – Short Dick man.

What’s Gabba all about?
Gabba is about being a little, lost dance student in Brighton Town and discovering a night called Wrong Music at the Volks and losing your shit to the likes of Countryside Alliance, DJ Scotch Egg and Ebola. Then realising that you could possibly be on the verge of turning into a crusty, well… I wasn’t crusty thankfully but I did love Gabba.
Deal with it!

Where do you go when you’re in the fair city and you’ve got some Zara time? If it’s go walk along the Southbank, please make something up.
I like strolling through Camden Market! It is horrid at the weekends and full of tourists chasing their own tail but this all feeds into my strange habit of secretly jumping into tourists cute little holiday snaps on Camden Market bridge, I’ve been doing this from the age of 13, so I suppose this makes me an underground, self-made international supermodel of some sort?