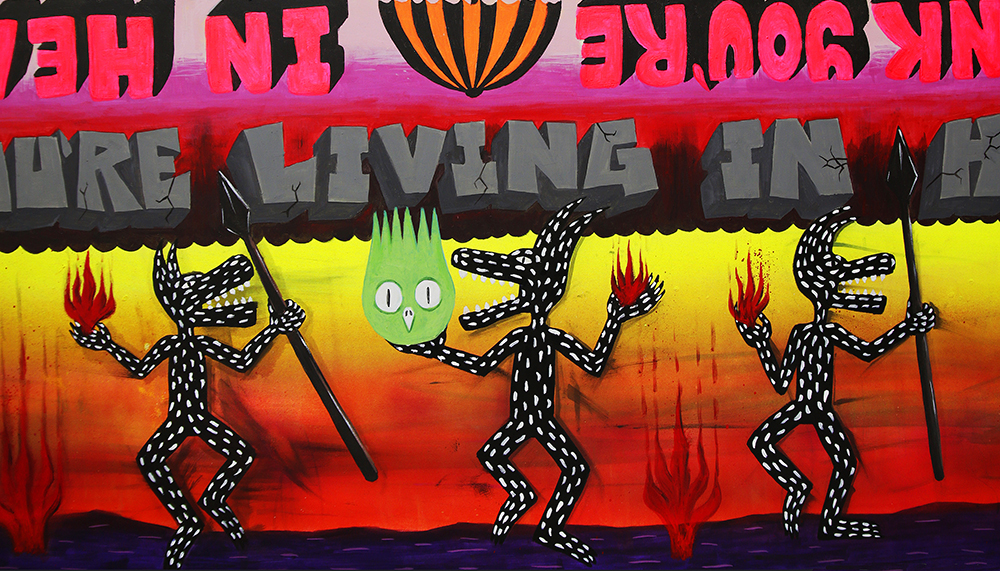 If you’ve got on an Overground train then you will have seen Dscreet’s iconic owls gazing back you from walls, shutters and sidings. We first spoke to him a few years ago and when we heard he had a show opening at BSMT gallery 19th Oct – 1st Nov we thought we’d get back in touch.

Hey there Dscreet, it’s been a while. Been busy?
Hi Josh it’s fantastic to write to you over the interweb after so long, God knows I’ve had enough of real human interaction. Yes I have been very busy, thanks for asking. I’m taking this art thing too seriously, locked myself up in a dark room to do elaborate doodles of song lyrics, it seemed like a good at the time but now it’s driving me mental and I want to go outside. I heard it was a smelting summer…

So what’s going on with your show on BSMT? What can we expect?
It’s music themed/highly conceptual shit; 40 paintings of 40 of my favourite songs. It’s harder than I thought to select, every day I think of better songs and ones I forgot. Today I remembered Devo and The Misfits and thought I should probably swap them for the ones I already did of Hanson and the Popcorn Song. There will be karaoke, a cover band, drinks in plastic cups, overpriced merchandise, hopefully a drunk girl flashing her boobs and crushing her boyfriends neck, just like all the best gigs.

You’re well known for your owls. Do they invade your dreams and if they do, what’s the wildest thing they’ve done in dreamland?
Actually they don’t invade my dreams but have invaded other peoples. I have a friend who will remain nameless and I hope he/she doesn’t mind, but during a total mental breakdown he/she saw the owl staring through them; their entire existence fractured into the ether as they surged beyond the chrysanthemum and a new reality crystalised. He/she is back now, and strong and driven and loving life, so I hope there was something beneficial in the experience.
The other day I was painting and a girl was tripping hard, she was very enthusiastically telling me how she likes to stare into the owls eyes and leave her body whenever she’s on acid, which sounded like it was a lot. So I don’t know if theres a psychedelic pattern of dream manifestations and ego dissolutions emerging here…

Where can we see more of your work?
Smoke some Changa. Don’t do drugs kids. Kids don’t read le cool do they?