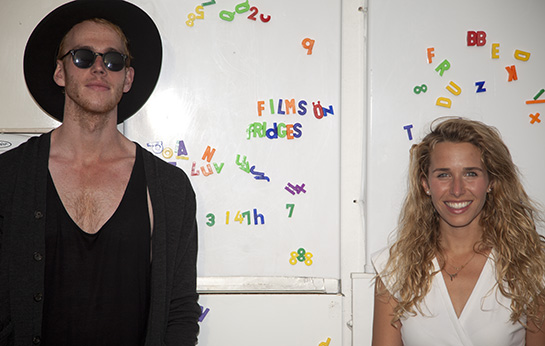 What’s artistic about white goods, you may ask. The transformation of the legendary Fridge Mountain on Fish Island near Hackney Wick provides some answers. Scout Limited founders Lindsey Scannapieco and Mat Triebner discovered a way to marry the area’s creativity, history and Olympic future through their Films on Fridges project, having learnt about the area’s uniqueness on their LSE Cities programme.

What’s Scout Limited all about?
We have a creative approach to urban design, looking to activate vacant space in artistic and unusual ways. We look to create contextual projects that reflect the area and the location in a really strong way. Films on Fridges is our first big project, but we are looking into pop-up projects in Brooklyn, LA and another in London.

Why Fish Island, films and fridges?
We became interested in the area while studying it at the LSE. Fridge Mountain had become a mystical icon in this area of London; the landscape became a sculpture in an odd way and we thought it would make a really interesting platform to showcase the current collection of energies: its industrial past, the current creative energy from the high concentration of artists and next year’s future Olympic Games. We are looking at all of them together in the same platform, which I think is quite rare. Most of the time artists work in quite distinct spaces.

What makes Hackney Wick unique compared with the rest of London?
It’s physically constrained by the A12 and the weave of waterways, so it really is an island. Because of this, over time people have been able to create a strong community that works together and supports itself in a very interesting way.

Is it hard to push the envelope with this sort of project?
I don’t deny there’s a lot of pop-up outdoors cinema; it’s very popular. But this project does it in a unique way and takes into account the historical background; it creates an interactive, fun and educational platform at the same time. In that sense, I think it’s quite original. It is difficult to run something so temporary that still requires such organisation. But it has been a learning process and we are really happy with the way it has turned out.

How did you pick the line-up?
We chose the same dates as the Olympics in 2012, just a year earlier. We picked sports as the theme for the films, to capture the Olympic energy and show them in a really interesting setting. We tried to include everything from classics – like Rocky, Cool Runnings and Arnold Schwarzenegger’s Pumping Iron – to more obscure sports films and documentaries, that all celebrate the athletic event to come. To reflect the local history, we also have an East End Shorts night in collaboration with the East End Film Festival. It’s all in the spirit of what is currently there or what will be there, and it provides something fun and familiar as well as some interesting films.