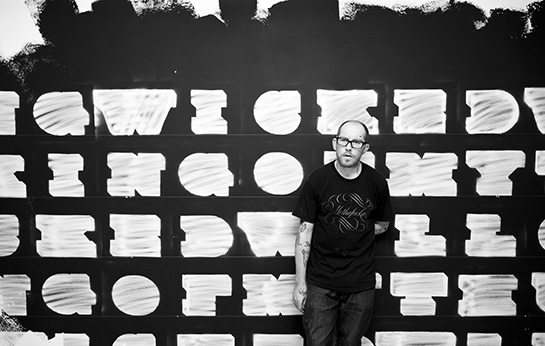 Although being a big name in the graffiti world for years, EINE shot to fame to the rest of the world when David Cameron gave one of his paintings to Barack Obama when the two leaders first officially met. If you’ve ever travelled around the east of London you’ll probably know him best as the guy who paints letters on the shutters of shops when they’re closed for the night. He also does those enormous murals spelling out words like SCARY and stuff. Josh Jones caught up with him while he was painting another big piece for the Unfair Part 1 at the Whisper Gallery.

Is it weird painting your enormous murals in broad daylight with the police and council happily walking by?
Only when you don’t have permission to do it.

What’s the best thing to get paint out from under your nails?
Scalpel blades.

Would you ever go and paint letters on shutters in countries that use different alphabets? It might take a while though, there’s like 44 characters in the Cambodian alphabet alone.
I would go and paint shutters in countries that use different alphabets, but I would stick to the English A-Z. I had this conversation with somebody in China, I know the English alphabet as it’s my language, so I can stretch and pull and twist the forms of the letters to suit my needs and they still look cool. Whereas, because I’m not familiar with the Cambodian alphabet, because I can’t read and write Cambodian, I could do something to a letter that made a cool shape in my eyes but totally made that letter illegible to a Cambodian and as the basis for what I do is communication it wouldn’t make sense for my letters to be unreadable.

In about 2006, you said you had done a cartoon strip for my ‘zine Pavement Licker but you just needed to fill in the last two frames. Have you done that yet?
Yup, I did finish it, but sold it to Vogue, sorry. I’ll do you another one, promise.

What’s next for you?
I’m off to Miami, where we are trying to get some walls to paint but not having that much luck with the people who are supposed to be looking after us. After that we are heading down Mexico way.