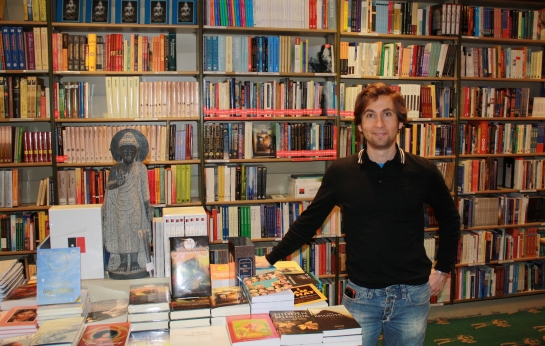 I first met Etan Ilfeld when friends and I dashed into Tenderpixel to catch the last day of Tobias Smith’s exhibition, only to find the photographer boxing up his prints. Etan insisted we should see some art and so, next thing we knew, we were following him to view his collection in his Soho flat. I was immediately taken by his energy and enthusiasm.

With a history of brilliancy in chess and maths under his belt, Etan got a masters in film from the University of Southern California and became a movie producer. Then he came to London and founded Tenderpixel on Cecil Court. He recently branched our on the street, buying Watkins Books when it went into administration. This week, he turns Cecil Court into Flicker Alley in a nod to its former fame as the heart of the silent film industry. I caught up with him to ask about his many interests and how he keeps up with them all.

You’re a busy guy, Etan. You run a gallery, a shop, you’re behind two festivals this week and you recently took on a bookshop. How do you do it?
I’m a bit of a night owl. Running my own business means that I can go to bed every night at 4am and wake up at noon. That way, I have an intense afternoon, relax in the evening and then work late with no interruptions until 4am each night. Of course, I’m also very passionate about everything I do.

You’re also a chess, maths and physics whiz. What drives you most?
I’m a curious person and I believe that most of the boundaries that categorise the world are arbitrary. Art and science are interlinked, and there is no need to divide the two. Similarly, creativity tends to flourish when analytical skills are mixed with intuition.

Tell us about the Flicker Alley festival.
During the silent film era, Cecil Court was known as Flicker Alley and all the major film companies had businesses there. During the festival, we screen silent films and have live music played alongside the films. We also have blue vinyl stickers in the style of English Heritage plaques on the shop windows in Cecil Court indicating which film company was at each address.

Please tell us the story of your saving Watkins Books.
Watkins is the oldest shop in Cecil Court (it’s been there since 1901) and is located just opposite the gallery. When I heard that it went into administration last year, I decided to see if this historical shop might be a viable business with the right leadership. I ended up keeping all the staff and maintained its core as an esoteric bookshop. Meanwhile, I built a proper website for the store and relaunched its magazine, the Watkins Review: Mind Body Spirit magazine. This year, we published a list of the 100 most spiritually influential living people.

What’s the ‘spiritual map’?
The spiritual map is a map that lets you see where spiritual and paranormal events have taken place. It uses the google maps API, and enables any visitor to submit their own geo-spiritual sightings. It’s on our website and will soon be available as an iPhone and Android app.

Where do you like to search for the supernatural and dabble in science in London?
The supernatural is all around us, but Alternatives have excellent talks every Monday at St James’s church. For maths and physics, I recommend the British Museum’s clock room. Clocks were the foundation for secular time and the forerunners of the computer.

See the Tenderpixel website for listings of the free film screenings as part of the Flicker Alley and Tenderflix festivals.