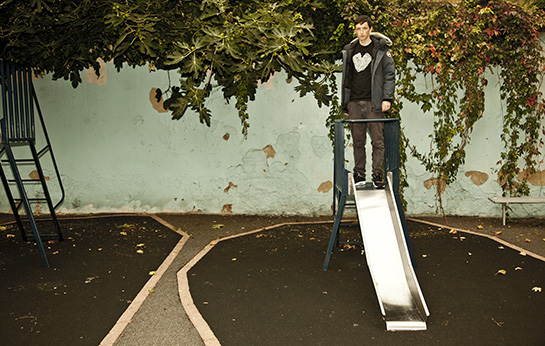 Totally Enormous Extinct Dinosaurs will literally rock your socks off and blow your hair back when he plays live. The DJ/producer type has just got back from tours in Europe and the States and is now gearing up for the release of his debut album in the new year. He’s a very busy boy at the moment and Josh Jones was lucky to grab a few minutes with him to ask some inane questions.

You’re pretty multi-talented on many instruments, if there was an apocalyptic episode (don’t worry, you survive) which instrument would you save to help you rekindle humanity?
I’ve spent a lot of time fantasising about an apocalyptic episode. Mostly though I plan which shops I’d raid and what weapons I’d carry around. Basically B&Q is the place to be, but I’d hit up a few museums on the way. Saving an instrument is something I’ve been to selfish too consider up until now. I’d choose the piano though. My favourite instrument by far, and if shit gets really bad you could strangle people with the strings and maybe make a bow and arrow somehow. And you could hide inside it.

You’ve been on the road for most of the year – where’s been the best so far? Why’s that then?
That’s hard to say, so many trips have been really amazing. We were in Iceland last weekend, and I loved it there, I’ve already decided its my next holiday destination. You can’t beat volcanoes and sea food. Sometimes just the party can make a place; Essen for example is not the greatest German city, but we had a better night there than many. I’m about to go back out to America and I can’t wait to get back to California, LA in particular trips me out, in good and bad ways.

If T.E.E.D. was to do an ‘Unplugged’ gig. How, erm, would you go about that?
I would love to do it one day. I have lots of ideas but the first one I want to try is lots of tuned percussion (marimbas, glockenspiels etc) and a brass band. I hope I get the opportunity to do that, and that because I’m an electronic musician people don’t assume I’m not capable. There is always the option of going battery powered, I probably have enough gear that can do that. A few years ago I did a song in the back of a black cab and we used a violin and battery powered Casios, it worked in a sense.

Do you ever changed it up a bit during a show to keep your dancers on their toes?
Yeah and they don’t like it because it messes up their carefully planned costume changes. Though I mainly change it up to keep myself on my toes. I think when we get into the longer tours next year when we have 15 dates in 18 days say, we will have to do it more like a band and have a strict set list. Not that that is a problem, I actually like the idea of really honing down an hour long set over many nights. There is still a lot the explore with the live show, Ive been so tied up with album work and touring that its been left behind a bit. Hopefully by the time the album comes out I’ll have bought it up to scratch.

What’s next for you?
A couple of weeks in America and Canada, then UK and Europe shows until Xmas. Then we are off to Australia for New Years which is as frightening as it is exciting. And suddenly its next year and there are all kinds of tours planned. The album is coming out early 2012, not completely sure of a date yet.