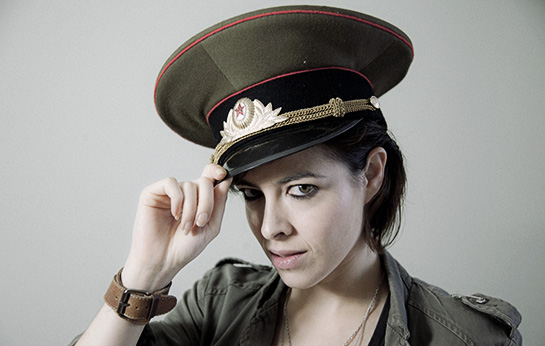 Katherine Templar is an actress who’s gone down that well-trodden route of doing a degree in genetics, then acting in period dramas and then, of course, getting a role in the soon-to-be-released Human Centipede II. Josh Jones had a chat with her about what the hell happened there, what the hell happened on set of the ‘sickest film ever’, and the rest of the things she’s doing. In other news, she’s just got back from prancing about in the desert at Burning Man.

So how did you go from genetics to acting?
When I was ‘advised’ to get a more ‘sensible’ degree aged 18 I found myself gravitating towards genetics. In all honesty I absolutely loved it. I am a complete geek on the inside. However, once I’d done that I realised I still desperately wanted to act so I applied to drama school, which I have never once regretted. Although, I am still occasionally found reading New Scientist in the green room…

So, let’s get this straight, you were cast in period dramas and then moved on to The Human Centipede II?
I did indeed. I was lucky enough to have my first film role in Elizabeth the Golden Age. I was told at drama school to grow my hair long and work the period drama genre. However, I’ve always loved edgy projects and horror and was always more drawn to the parts of the damaged/crazy sidekick than the romantic heroine. So when the Human Centipede came up I jumped at the chance of a screen test. It’s easy to get pigeon-holed as an actor but for the moment I luckily seem to be able to get castings for both genres!

Can you tell us the weirdest bit you’re in?
Sadly I am signed into confidentiality over the plot. However, it certainly packs some punches. It takes the idea of the first one and runs further than you could ever possibly imagine with it. As Tom Six (the director) said, it really does ‘make the first one look like My Little Pony.’ He’s like the Willy Wonka of the world of gore. I would definitely let him babysit my kids (if I had any). They would have a blast.

Does it deserve to be banned in the UK?
In a way it’s great publicity that is has been. Who doesn’t want to see a banned film labelled the ‘sickest film of all time’? But I disagree with the BBFC that it could cause ‘harm to the viewers’. I think the scariest thing is what it shows of the opinion they have of the general public. It is a great testament to the power of story telling but at the end of the day it is just that — a story and I think people are intelligent enough to make their own minds up as to whether they want to go see it. The fact that it has a scheduled cinema release in the US in October and then Australia and New Zealand and we like to think of ourselves as being a much more open-minded country…

What else are you up to acting wise?
I have just finished work-shopping a very edgy piece of theatre called Quartet in the Old Vic Tunnels with an incredible new director, Suba Das. It combines dance, film, music, circus and some rather punchy post-modern text! We’re looking now to expand that into a bigger site-specific project.

Is this really the sickest film of all time? Find out what Katherine says in the interview in this week’s le cool…