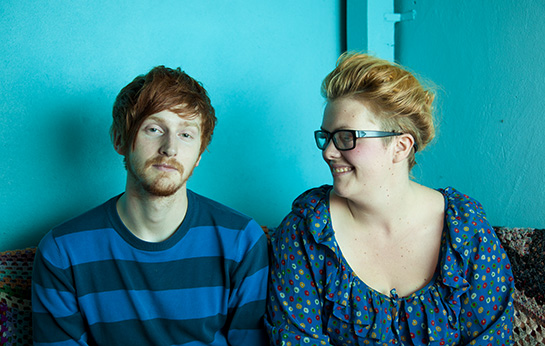 Jayde Adams (that’s her on the right) and Oli Bettesworth (that’s him on the left), along with Oli’s mum Janet (she’s hiding) are the founders of east London’s newest, and arguably, best comedy night, The Painted Grin. Comedians themselves, they are picking only the very best on the circuit to appear at the weekly, free to get into, night that you’ll find in the basement at Benny’s bar on Bethnal Green Road. And they’re totally crushing on each other. Josh Jones asked them some questions. And these are their answers.

Tell us a bit about the Painted Grin… what’s this all about then?
Oli: The Painted Grin is a new comedy club in east London, started by my excellently funny mum Janet, my quite droll girlfriend Jayde (I don’t like to go overboard with the compliments as her ego tends to get by somehow without them) and I. It’s a family-run night, although I don’t mean that to sound as tediously wholesome as it does. We’ve been gigging on the London circuit for a while, and in that time we’ve gotten to know loads of excellent comics, so each week we invite six of the best stand-ups around to come and perform. It’s a friendly, relaxed atmosphere, and we’ve had a whole lot of fun running it so far. Oh, and it’s in a darkened basement bar – which is exactly where comedy belongs.

Jayde: My ego is perfectly formed and completely tamed. Haven’t you at least got one little compliment for me?

Aren’t you and Jayde both comedians yourselves? That’s nice.
Jayde: Yes it’s lovely. But can sometimes be difficult when we make jokes up together by mistake, for instance, I will set it up and Oli finishes it with a punch line. Then the argument is, who has more ownership over it? Then it’s a race about who will get the next gig.

Oli: Most of the time it’s not really a problem though, as our acts are very different in style.

Jayde: Correct, its not really an issue. I love making people laugh, can’t really do anything else, the normal thing people say is ‘That seems like the scariest job in the world, I could never do it.’ The last person who said that to me was a brain surgeon – I told him that sticking my fingers into skulls petrified me, so we agreed to not swap jobs.

Oli: I’ve been a stand-up comedian for two years, and I’ve never had as much fun. Turning up to pubs, clubs and basements in previously unexplored and far-flung parts of London and trying to make complete strangers laugh for five or 20 minutes before leaving has been an excellent, if often somewhat strange, experience. But if I’m honest, it can also occasionally be a maddeningly frustrating, confidence-quashing nightmare if you’re not careful – but like an abused spouse, you keep going back for more. Because you love it, and you know that deep down it loves you too… and it never meant to do those things to you.

What’s funny?
Jayde: Easy… me and all the acts on at our comedy night. No, for real… French and Saunders, Julia Davies, Ricky Gervais, George Carlin, Bill Hicks, Charlie Chaplin, Morecambe & Wise  - quite a random bunch but that would be the best bowling party ever.

I’d never been near stand-up before I met Oli and was a comic actress (spoofs and sketches), dancer and cabaret performer before this career move (I’m all over Youtube.com/jaydeadams) Oli has introduced me recently into this world and as The Painted Grin compere, I’m using our night as a way of gaining more experience as a stand-up and writing new material. Also to be inspired by six amazing comics every week is priceless – plus Oli is a super mentor (see I complimented you).

Oli: Thanks dear. Just speaking personally, at the risk of sounding pretentious I think what’s often most funny is truth. It can obviously be presented in a lot of different ways and in a lot of different comedic styles, from the lightest observational comic to the fiercest social commentator, but I think the richest laughs often come from jokes or routines that resonate and forge a connection with the audience by presenting a personal reaction to the world around them. Having said that, I’m a big fan of the sillier stuff too – one-liner or pun merchants like Tim Vine, slapstick clowns like Charlie Chaplin and zany comics like Harry Hill, so perhaps I have no clue what I’m talking about.

Jayde: Unfortunately my nudity will never be found at The Painted Grin. I’ve probably lost business there but I don’t want to lead anyone on.

Oli: The most obvious thing you won’t find at The Painted Grin is a bad comedian – we make sure to handpick only our favourite acts from the circuit, rather than making anonymous bookings.

I’ve got a joke for you… you’ll love it. You can use it in your act. Wanna hear it?
Oli: Yes please. But only if you promise not to sue when it leads to a sold-out arena tour and a bestselling DVD at Xmas.

Jayde: You’ve already told me that one and it’s not going in. Soz.

The Painted Grin is 8pm every Tuesday at Benny’s Bar, 119a Bethnal Green Road, E2 7DG.