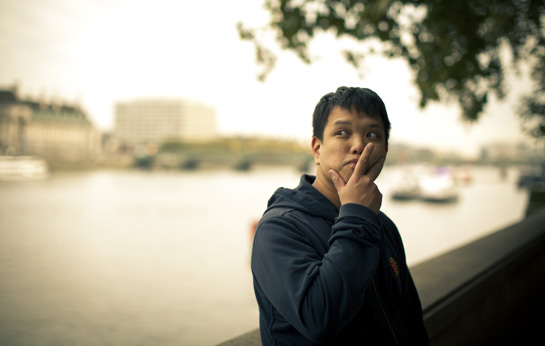 Super turntablist, Kid Koala is one of the cheeriest guys you ever did meet. The Ninja Tuned, Canadian musical maestro’s beats have appeared on everything from Gorillaz songs to the Scott Pilgrim soundtrack and he’s opened for the likes Radiohead and Björk. He also has an absolutely awesome live show to go with his smashing new record ’12 bit Blues’ and he’s bringing it, courtesy of the guys at Soundcrash, to the O2 Academy Islington tonight. You should just go. Josh Jones had a quick chat with him about stuff.

When people only use CDJ’s, does that make you cry a little bit?
No, I only cry about really catastrophic things.

You’ve had some unusual things happen at your shows, including bingo in the intermission a few years ago. Do you have anything new planned for this show at O2 Islington Academy?
There will be dancing girls! Puppets! Robots! Kazoos! Turntables! And all forms of Kid Koala silliness.

Do your friends all ask you to DJ at their weddings? Do you have to turn them down gently or go hell for leather and DJ the crap out of their party?
I’ve only played at one wedding for a friend. And yes, it was ON! I even had to rock a bunch of tango stuff for the 50+ demographic.

You’re known for being a super cheery guy – have you ever turned up to a show in a terrible mood and had to put on a false smile? Or do you just play a darker set when that happens?
In the winter time I’ll play exclusively melancholy sets.

You’re also an acclaimed graphic artist – have you got any graphic novels on the horizon? If so, what are they about?
The next one is about a mosquito that moves to New Orleans to join a jazz band.

If you had to choose between the pen and the needle… which would you choose?
It’s all storytelling: music, books, live shows… If I ever had to quit any of those I would be sad.