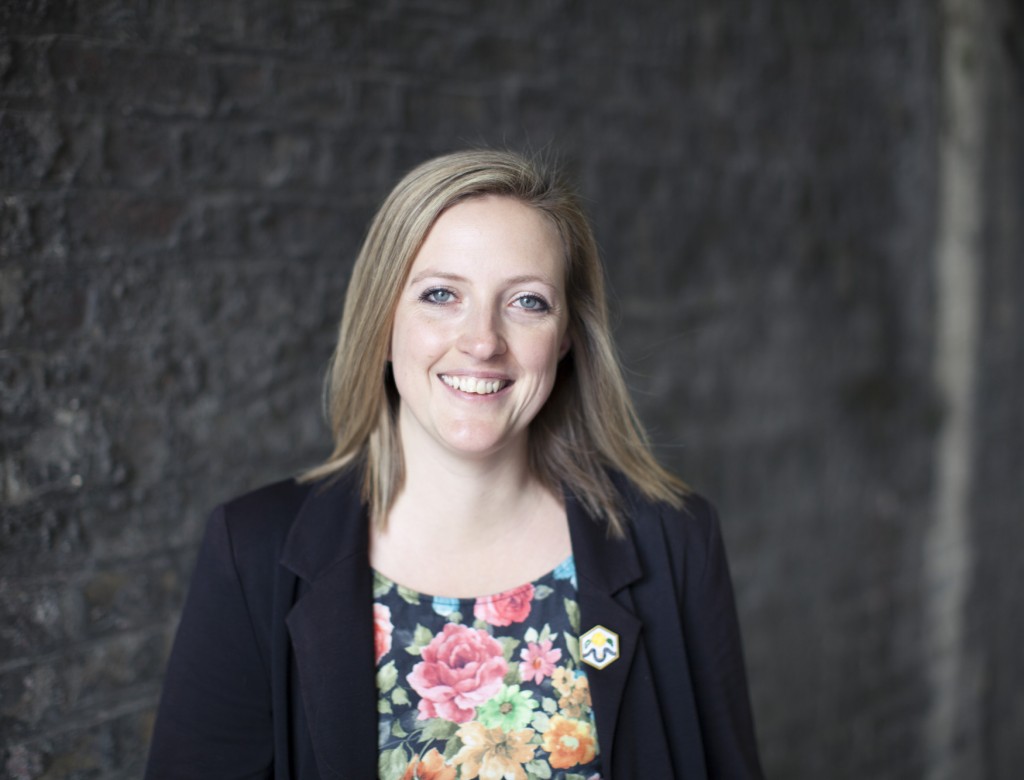 Hannah Rhodes is the lovely lady behind Hiver Beer – the Bermondsey-based bee beer (kind of). Striking out on her own, Hannah’s making her name for herself with a delicious London beer, which could, in a way, help save the planet. Josh Jones had a chat with her.

Hey Hannah, what’s a usual day like for a honey beer brewer?
Hey Josh! I honestly don’t know. No two days seem to be the same at the moment. So much has happened in two short months. Visits to the brewery, taste testing, beer and food matching sessions with bartenders, attending the London Honey Show and supporting the amazing bars and restaurants that have taken Hiver on so far. This is the first time I’ve worked for myself and I’ve really put everything into Hiver, so at the moment it’s pretty much an obsession and there’s something on seven days a week. I can’t tell you how rewarding it was the weekend after Hiver went live to be at Meatopia Festival and see so many people wandering around with a bottle of Hiver, with people coming back to buy more and tell me how much they’d enjoyed it. It’s been a fantastic few months and I’m so pleased that I’ve taken the risk to get the beer off the ground.

How did you get into the old bee + beer game?
I guess it started at the Hide Bar in Bermondsey back in 2007. The Hide bar had just opened and were running these amazing free Tuesday night taste evenings so my friend and I would basically sneak in and get drunk for free on amazing booze. Meantime Brewery ran one of the tastings and within a fortnight I was working for them and never looked back. This time last year, during Urban Food Fortnight I tasted Urban Honey for the first time. I read a book about it and attended ‘An Introduction to Bees’ course at the London Honey Company in Bermondsey. I ended up getting hands on with the bees on a London Rooftop and knew that I really wanted to do something that was involved with this fantastic industry in some way. After trying a few honey beers and chatting with friends about the type of beer that I’d hoped to find, I decided that you’re only here once and that I should have a go at brewing the beer that I had in my head. A year later and I can’t believe I’m working for myself and that Hiver really exists! It was fantastic that the Hide Bar were keen to get behind Hiver and so they were the first London stockist and it was the first bar that friends and I enjoyed a Hiver after a year in the making. Aw.

What’s the process like? Do you have quite drunk bees hanging around?
Gosh, can you imagine if that were the case? I do always get overexcited when I see any bees around though and I’ve been secretly throwing wildflower seeds in every nook and cranny down Maltby street in the hope of attracting more next year…shhhhhh! So basically I source three types of honey from independent beekeepers and I use this honey as an extra ingredient while brewing a blonde beer base. The honey goes in at fermentation, which basically makes the yeast go crazy as they have a new hit of natural sugar to play with. They convert most of the sugar into alcohol and through maturation the flavours really mesh together and Hiver ends up being smooth and easy drinking with this lovely hit of honey on the nose. I could bore you senseless talking about the process and the importance of the speciality malts and hops but hopefully this comes across in the flavour, The beer isn’t pastuerised, which to me is really important for good beer AND good honey and the feedback so far has been really fantastic.

How can us Londoners help with the bees survival?
Plant Wildflowers! I’m really looking forward to the LBKA planting day on November 10th and it would be great if anyone can come along and help us plant a load of crocus bulbs. This is the first food source for bees in the New Year and I’ll be offering some Hiver samples for people that attend. We’re always posting about this kind of stuff on Twitter if you’d be interested to find out more as well as #BeeFactFriday in case you fancy a giggle. I was talking with the amazing Russet in Hackney last week too and I hope there’ll be some scope to do some wildflower planting with them before Christmas. Watch this space.

If you had to partner Hiver Beer with a food, what food would that be?
Awww that’s a tough question. Just one?? Pecorino cheese and Hiver is absolutely amazing but then so is a Pulled pork sandwich. Lets just say salty, whether it be meaty or cheesey works a treat.

Can you tell us what’s going on with you and Maltby Market then?
Absolutely. I’m really delighted to be one of the traders on Sundays at Maltby Street Market in Bermondsey. The Market has been going fantastically well on Saturdays for a few years and they’ve just started with new traders on Sundays. I’m so excited to be involved. I’ve been brewing some new trial flavours and so I hope to have all sorts of goodies on the stand in the run up to Christmas. I love working in this area as all of the businesses are so friendly and helpful and of course it’s great for inspiration. Jensen’s Gin have been a massive source of support since I started. It’s only me in the business and so it makes the world of difference having people like that around you and I can’t wait for their distillery to open soon. If you pay them a visit be sure to ask how much Halva has been eaten that day… they’re Halva monsters down there although I can take full credit for their new love of Soreen Malt loaf. I’m very happy about that.