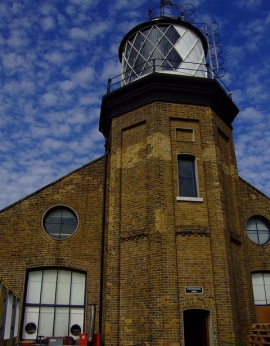 A lighthouse, a dead cat and a piece of music that will play till the year 2999: Herb has a good sniff round an ‘entirely odd secret quarter of London’ on his latest architectural amble

The bongs emanating from London’s only lighthouse won’t stir the black cat curled up in a basket in the shed just outside. That cat is in the Big Sleep, the one you don’t wake from. It’s a stuffed cat. Even so, it won’t last as long as the bongs – they have another 988 years to play out. Welcome to the Experimental Lighthouse, the extraordinary centrepiece of an entirely odd secret quarter of London called Trinity Buoy Wharf.

England’s lighthouses are looked after by Trinity House, which settled on the finger of land where the Lea flows into the Thames in 1803. The lighthouse keepers have since moved on, but Trinity Buoy Wharf is full of maritime heritage – even the deserted street leading to it is strewn with a giant buoy and anchor, as if dumped by a tsunami. The Experimental Lighthouse was built to test technical lighthouse features in 1864. The architect James Douglass went on to design a legendary lighthouse in Devon, where four others had been trashed by storms. Eddystone Lighthouse is about three times taller at 51 metres and a 1970 one-hit wonder band was named after it. Lighthouses are lonely but not the Experimental one- an earlier lighthouse stood next to it until the 1920s, and these days it keeps company with two floating lighthouses, or lightships, called LV93 and LV95, now converted into recording and photographic studios.

This lighthouse, like much industrial heritage, ain’t dressed up in fancy Victorian neo-classical embellishments. It’s functional but elegant. Its octagonal brick tower is built into a big Chain and Buoy Store building. Stairs wind up to the lantern room, a cylinder of diamond-latticed glass facing the river with a railed walkway all the way around. No-one seems to know what the water taps marked M and P in the metal wall are – maybe to extinguish fires in the days before the lanterns were electric. There’s no big light now, but an amazing view across to the O2 and Antony Gormley’s Quantum Cloud sculpture. Even more amazing are the chimes that fill the space – the sound of sampled Tibetan singing bowls that tingle in the metal, creating a transcendental tranquillity and otherness.

These sounds are Longplayer, an ambient sound piece by Jem Finer that started playing in the Experimental Lighthouse at the stroke of midnight as the year 2000 began. It’s the longest music ever because it doesn’t repeat until midnight 31/12/2999. Nowadays, Longplayer’s programme is floating out there on the internet, but there’s a vintage bubble iMac that’s been hosting the app since the first note and still drives the sounds that fill the lighthouse space. The iMac is behind glass in the storehouse’s wooden attic space just off the lighthouse’s winding stairs.

Also wooden is a shed nestling up against the lighthouse, called the Faraday Effect. This is where the dead cat is. Michael Faraday, who pioneered work on electromagnetism and came up with induction that drives electric dynamos and hence our civilisation, was resident at Trinity Buoy Wharf in the 1840s. He was working on ventilation issues that plagued lighthouse lanterns, but it’s not certain he had a cat and as for the shed, it’s a charming installation by Fourth Wall Creations, made in 2005.

There’s a lot more at Trinity Buoy Wharf, like art and dance, a Container City community and two scrumptious eateries. Urban Space Holdings have created a mad little urban quarter totally unlike the high-finance citadels and luxury-living elsewhere in Docklands. A sense of time and tide, lapping at the beyond, permeates the place. Let’s hope it survives yuppification, sea-level rise and the collapse of civilisation, at least until the music stops.