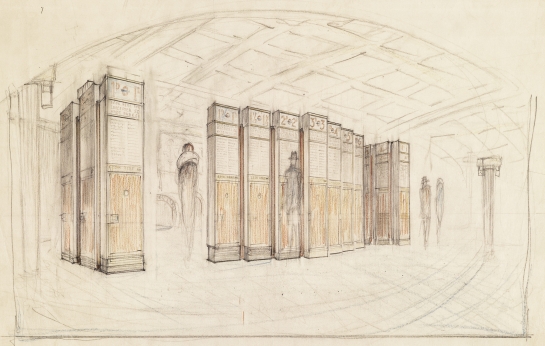 Just a ticket hall? Herbert Wright reveals the beauty of an underground art deco roundabout – one of London’s busiest throughways

The architect of London’s first skyscraper also designed a huge, dreamy structure that’s invisible from the street, even though it’s bang in the centre. Descend a mere 4.5 metres below street level and, behold! A giant slice of space 36 metres across, full of columns and marble panelling and surging with humanity… just like when it opened in 1928.

The circular roundabout of Piccadilly Circus station’s ticket hall is the work of Charles Holden, who designed 55 Broadway above St James Park station and a second skyscraper, Senate House, which was George Orwell’s inspiration for 1984’s Ministry of Truth.

The Edwardian tubes – the Bakerloo, the Northern’s Charing Cross branch and the Piccadilly – accessed West End streets via lifts to ground-level premises, usually designed by Leslie Green with glazed brick facades. Covent Garden station is still like this, and boy is it tight. In the 1920s, Piccadilly Circus was way tighter: 18 million riders squeezed through the tiny ticket hall by the corner of Haymarket in 1922, where the statue of horses displaying their genitals is. It was the Jazz Age – the Charleston was all the rage with thoroughly modern bright young things blowing away yesterday’s war blues and the stuffy vestiges of the last century. Piccadilly Circus was the Heart of Empire, and people flocked to it, to be seen in the fabulous Criterion Café, catch shows at the Criterion Theatre or the London Pavilion, marvel at the new electric ads for Bovril and Schweppes, promenade up swanky Regent Street, or hang out in the new bohemia of Soho. Sure, nowadays, Piccadilly Circus is rammed – midnight is just as crazy as rush hour – but imagine processing those crowds through the equivalent of a single shop premises. A follower of the Arts and Crafts movement and European Modernism, Holden designed a new ‘Heart for London’ at Piccadilly – one that could take 50 million passengers annually, with vast new shafts carrying 11 escalators to the Bakerloo and Piccadilly lines. Building started in 1925.

Piccadilly Circus’s swish new ticket hall was a celebration of Art Deco, full of peach-hued surfaces and soft light. Around its edge, glass showcases displayed fine shop wares, and one passageway led directly into a department store called Swan & Edgar. Tobacco, fruit and confectionary outlets were built in, and new-fangled public phones mounted on an arc of wall. Just look at the exquisite details still there, like the cylinder lampshades mounted on the capitals of the columns that circle in two rings, or the fancy arrows on the signage pointing to the five exits.

Today, the ticket hall is a bit knackered. Swan & Edgar became Tower Records but is now an outlet for mass-market ‘designer labels’. The World Time Today display, with its map and moving line of light, isn’t working. Half the phones have been stripped out and those left are unused and forlorn. The Trocadero passage, a great short-cut towards Soho, is strangely empty, decorated with tacky abstractions of urban graffiti-style patterns; but at least a makeshift t-shirt and pot noodle shop has some life when kids gather and swap breakdance moves.

It’s always go-go-go down Piccadilly tube. Thirty-eight million surged through in 2009, and Holden’s grand design holds up just fine. There’s a warmth there you don’t get in recent cavernous concrete stations. Holden did a similar vamping-up of ticket halls at Leicester Square and Knightsbridge, and his underground roundabout formula was three-quarters copied in the 60s at Oxford Circus. Times Square may outdo Piccadilly in its spectacle of lights, but, underground, it’s a mess. Piccadilly Circus may be the best model anywhere to handle subterranean crowds… with style.

Underground Journeys: Charles Holden’s designs for London Transport is in room 128A of the Victoria and Albert Museum until 13 February. Free entry