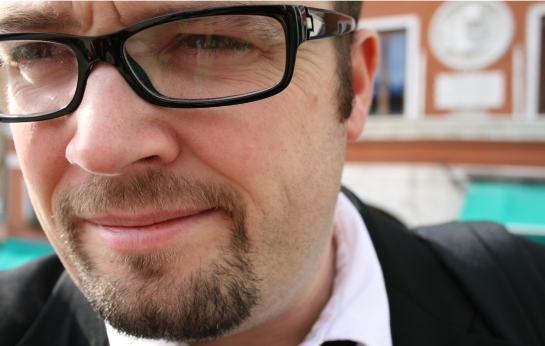 Course leaders of the Whitechapel’s Summer School for Literary Perverts Simon Morris and Nick Thurston promise – as well as experimental writing, reading and publishing practices — the participation of a poet who injects poetry into bacteria

There are eight days to go until the Summer School for Literary Perverts begins at the Whitechapel Gallery. Its main aims are to teach experimental writing, reading practices and developing your own publishing platform. I spoke to course leader Simon Morris — conceptual artist and one of the founders of Information as material,  currently writers in residence at the Whitechapel — about the school and about keynote speaker Canadian poet Professor Christian Bök, who injects his poems into bacteria so that they will outlast humanity.

What is a literary pervert?
Someone who tests the limits of language and investigates new methods of reading and writing.

What will the summer school consist of?
Over three days, participants will work collaboratively to transform the Whitechapel’s Creative Studio into a perverse library by re-reading reading through one another’s book collections. The project draws inspiration from Mel Bochner’s 1966 work, Working Drawings and Other Visible Things on Paper Not Necessarily Meant to be Viewed as Art by siting a conventional office zerox photocopier at the centre of the space and using this machine to read our way through each other’s publications, enlarging pieces of text, reducing other sections or repeating certain words or phrases. These copies will then be collaged onto the wall, transforming the creative studio into a literature house. As Marshall McLuhan observed back in the 60s, Xerography allows everyone to be their own publishing company.

A public reception will be held on the evening of Thursday 28. The public will join us for a viewing of the textual environment, a complimentary glass of wine, followed by a lecture by Professor Christian Bök, who will discuss his Xenotext Experiment, regarded by several influential critics as the world’s most significant poetry project.

“Through a series of algorithmic calculations, the computer program expels an abstract image based upon the original topographical placement of the type on the space of the page.” Eric Zboya

Is there anything participants can do to prepare for the school?
All students are asked to bring their 10 favourite books, which we promise to look after… we’re not bibliocidal (destroyers of books). Other than that, coming well rested and ready to think, work, write, and read hard.

Can you give us examples of the DIY approaches to publishing that course participants will be introduced to?
There’s a long and venerable history of DIY publishing. You’d be surprised how many celebrated authors did it themselves, at their own expense, publishing in advance of others’ validation. Here’s just one example of many we will introduce the students to. In the winter of 1912, Marcel Proust submitted a manuscript to three prominent Parisian publishers: Fasquelle, Gallimard and La Nouvelle Revue Française. Within weeks, all three had rejected the project. Fasquelle explained that they “did not want to risk publishing something so different from what the public was used to reading.” That ‘something different’ was the monumental modernist novel In Search of Lost Time.  The book was eventually published by Grasset, but only after Proust agreed to finance both the production and publicity. André Gide, who had been the editor at La Nouvelle Revue later confessed: “The rejection of this book will remain the most serious mistake ever made by the N.R.F. — and (since to my shame I was largely responsible for it) one of the sorrows, one of the most bitter regrets of my life.”

For technological and cultural reasons there’s been a great surge in the field of DIY artists’ book publishing, which is our own background. In London we’re big fans of AND., the Everyday Press and XMarks the Bokship.

What other plans do you have for the Whitechapel residency?
The residency has been up and running since April Fool’s day this year. We started with a film screening and Q&A with the expatriate Czech artist Pavel Büchler. Throughout the residency, we’re releasing a series of poster poems – each print is an A1 one-colour lithograph, freely distributed at the gallery, featuring a conceptual poem by an emerging writer. The Thursday public opening of the Summer School will unveil a visual interpretation of Alan Ginsberg’s seminal poem Howl by a young Canadian poet called Eric Zboya… It’s gorgeous – everyone will love it (see image).

The Summer School for Literary Perverts runs from 26-28 July at the Whitechapel Gallery. There are only concession and members’ tickets left, at £95. More information about the free public opening on Thursday 28 July will be coming up in the le cool newsletter.