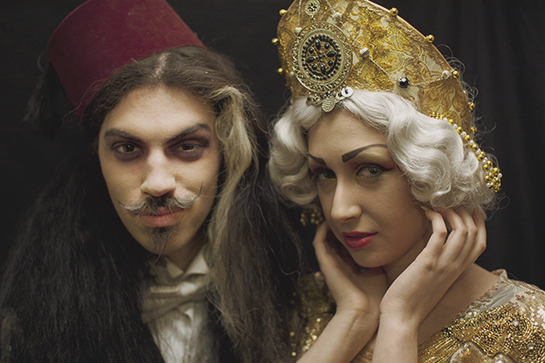 The Roustabouts are a Theatrical DJ duo (a collaboration between Markabre Charade & Anna Krohnistic), playing everything from Balkan Beats and electro-Swing to grin-inducing mashups of familiar guilty pleasures. Josh Jones used to be neighbours with Markabre and finally did the interview they arranged to do two years ago.

Hello there The Roustabouts. How do you roust and whereabouts do you do it?
Hello there! The Roustabouts are all about bringing a richer music experience to people. It was formed after going to countless cabaret nights and hearing the same songs over and over again. Half of the soundtrack to Minelli’s Cabaret and three covers of “You Give Me Fever” on repeat doesn’t make for the most inspired playlist. There is such a wealth of great music out there, new and old that should be shared and celebrated, it just seemed like a crime.
DJing at Cabaret events is often considered filler. We want to make it an engaging performance of its own, one that matches the spirit of cabaret and shares a similar sense of humour, theatricality and absurdity with our audience.
We are resident DJs at Circus in Covent Garden. We start the night off with our anachronistic brand of Electro-Swing as the audience dines. Between courses, fire-eaters, burlesque, hula-hoop, and aerial acts will step onto the grand dining table to perform. At the end of the night our tongue-in-cheek mashups go down a storm. Mashups are a great way to toy with people’s expectations, make the familiar fresh again and, of course, inject a little a humour along the way.
You can often find us getting our glad rags on for other events in London like Torture Garden, Boom Boom Club & White Mischief.

Markabre, do you remember when you scared the bejesus out of those kids trick or treating when you answered the door all dressed up to go out to DJ? I still tell people about that. It makes me laugh.
Ha! I do! If I recall correctly, I was sitting at home, even more ridiculously dolled up than usual, looking like some kind of evil undead circus ringleader and waiting for a very late taxi to turn up. There’s finally a knock at the door so I grab my stuff, rush to the door and fling it open sharply, ready to dive in the cab. As I prepare to cross the threshold with my best “It’s about f%#king time” face on, I notice two kids standing on my doorstep, silent, wide-eyed and most likely full of fresh adrenaline due to the monster they’d inadvertently awoken from the deep.

There was an awkward silence.

What followed was a series of small muttering noises from one child who seemed stuck on auto-pilot until he fell silent again and made a hasty retreat.

Do you fight each other to get the songs you want in your sets?
We both have a strangely similar electric taste in music so we always find ourselves on the same page. We both come from families of music loving freaks and grew up with the likes of Captain Beefheart and Frank Zappa so, naturally, I blame the parents.
When we first met, I think one of us was listening to Prince and Parliament while the other was listening to Tom Waits and The Tiger Lillies. Music was shared and The Roustabouts’ diabolical hive mind came into existence. There was much rejoicing.
We pretty much finish each others sentences these days.

Where did you do the best ever set you ever did do to date? And why was it so good?
We had a great time when The Ministry of Sound played host to Torture Garden. The crowd were really receptive and had a great sense of humour. The sheer extent of musical-mashup blasphemy we were allowed to get away with was truly astonishing!

I feel like you should have a residency on a luxury train that travels throughout turn of the century bohemia. Is that a fair assessment? Who would you invite on to that train to dance and drink absinthe with?
Oh absolutely! On our time travelling train Pola Negri & Rudolph Valentino would cut some rug while Marlene Dietrich and Klaus Nomi sang a duet. Of course, we’d reserve a table for Chaplin and Keaton.