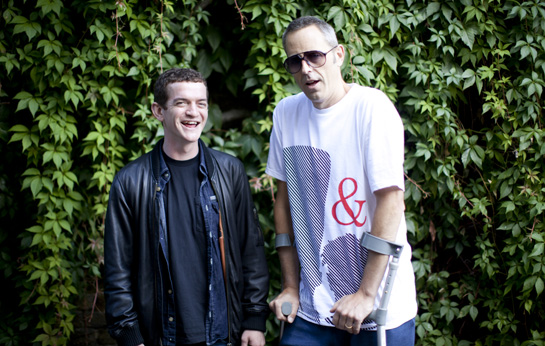 Tom Frain and Matt Smooth are the guys behind Scratch and B-Side – two of London’s premier hip-hop and cutting edge music nights. So committed to music are they that Matt seriously (no actually seriously) injured his knee on the dance floor. Josh Jones managed to speak to them about both their nights in between bouts of physio.

How did you guys meet?

I met Tomski when he was dropping hand me down nappies & ridin’ espadrilles earlier this year. Tom was running a label (Altered Vibes) which me & the great Rob Mac had the pleasure to work on – they released the first Gum Drop album & a bunch of other bits including Roger Robinsons insane poetry skillz which Rob produced & I played a few beats – beautiful times.

We progressed in our relationship as it was clear that Tom had the the baddest hair do’s, hung with the kool kidz, worked like a dawg, new more about music than the average 14 year old & always shared his ciggies..what more d’ya want in a partnership?

Scratch is 17 years in the rap game.. yeah i’m old & grey & should know better (that’s why I hang with wee man Tomski). We made our name in fusing events that highlighted art equally to music, with often first time shows for established playerz. Scratch the B-SIDE – we actually started this as a night years ago with Rob Mac but re-kindled the name once again as a perfect excuse to flex the FUTURE SOUND card – we all play shizz that can often be a misfit to our original Scratch / hip hop strict(ish) rule book. This is our green card to enter new pastures without getting slammed from our b-boy brothers – fact is hip hop has always been about testing the boundaries & diggin’ fresh new shit. We got pushed in to the old skool pigeon hole for the last few years at Scratch. Now we’ve moved on - Scratch still rocks & so does the B-Side – we’ve brought the art back through the 7″ limited edition vinyl flexi discs – designed by a different creative head each month with an exclusive track from that months live act. Next year we’re exhibiting a 12 month show displaying all the limited flexi vinyls with a box set release at NHAC – it will be so bloody FRESH FRUIT fresh!

You’re in a decent independent record store and all the record store staff are looking at you. There are no other customers. You’ve got one minute to choose three records to prove you’re not a twat. Which ones do you choose?

Who has the best trainers out of the pair of you?

Well this is a touchy subject amigo… Tomski has the baddest Nike collection known to man, the boy’s addicted and he knows it. Three-day-old Y fronts on his jock but ‘Tomski’ ID’s bustin’ loose on the cheese. I however have a select bunch of pumps, mostly hi-tops to anchor my 6′ 3″ fat self – currently loving my Nike ’89 Air Flights but still dipping in the Shell Toe, Stan Smiths (Rob Mac classic) arena when Run DMC are in the house and Adidas is on the menu.

Vinyls are pressed in the US of A. It’s a stressful turnaround as the artists never have enough time to get the tune approved & send with completed artwork to the States – then test pressed / checked / approved – pressed & sent back praying customs won’t hold us up. We have four weeks and the pressing company hate us!

What’s next on the horizon?

Loads of shows – we’ve got bookings for the B-Side well into next year with sweet labels / acts / artists… Bobby C TV 20th October who’s the King of AV, he’s from Canada and this will be one of his first UK shows so we’re hyped about that, Jhest (live) is locked for 17th Nov. Love doing shows with him and especially looking forward to hearing him rock the full live outfit.  We’ve been putting a bit more effort into Scratch too, Jazz Cafe shows with Charli 2na’s new band & P-Trix in November and DJ’s Woody Big Phat 90′s AV show, and The Four Owls live on 28th Sept at Big Chill House.