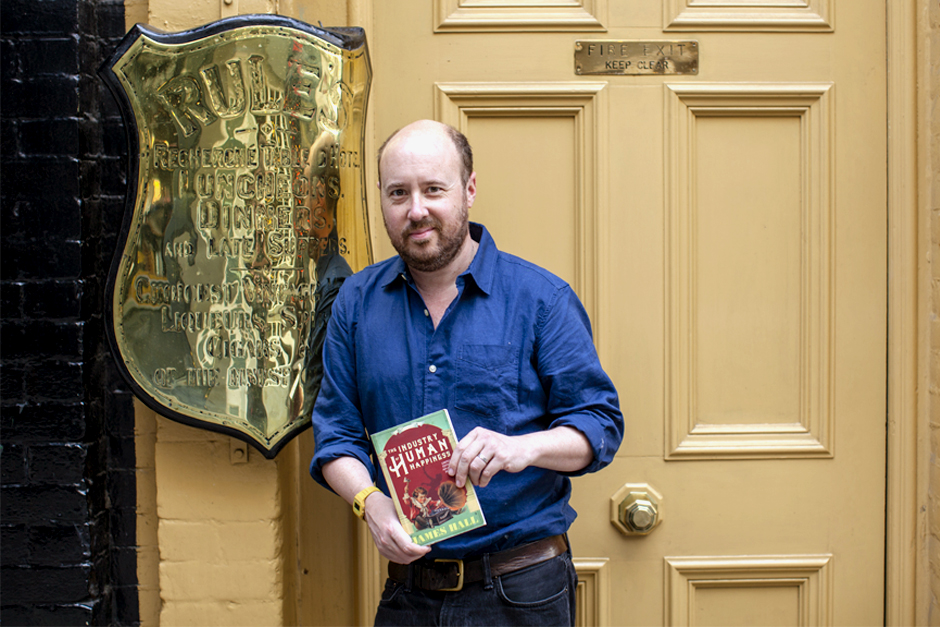 Music journalist, James Hall isn’t just content being a writer for the likes of The Daily Telegraph, The Sunday Times, The Guardian, FT or The Observer. No, he’s also written his first novel, which is out on 24th May. It’s called The Industry of Happiness and is set in the world’s first recording studio in Victorian London. Be prepared for love, murder, obsession and gramophones…

Hey James, how’s it going? Are you nervously excited or outright giddy that your first novel’s about to drop?
Both. I oscillate between the two, but it’s mainly outright giddy. It’s funny. Writing’s a very solitary activity. You spend years working on something alone and then – suddenly – it becomes public. It’s like opening the door and letting people in. I can’t wait for The Industry of Human Happiness to come out. I’m really proud of it.

So wait, this is a murder thriller set in the first recording studio in London ever? What made you decide to use that?
Yeah, basically. I’ve always thought that the launch of the gramophone and the birth of the recorded music industry in the late 1890s must have been a crazy time. Imagine capturing sound, stamping it on discs and trying to convince the public to buy it! The disruption, invention and format wars involved must have been off the scale. Plus you’re talking late Victorian London, a city undergoing massive change itself: the first underground trains and telephones, much more liberal views, a new century on its way. As the setting for a novel, it felt like fertile ground. Add a juicy murder on top and you’re off…

How did you find out about that place? Who’s recorded there?
The first recording studio was opened in a Covent Garden basement in the summer of 1898 by a few individuals working for The Gramophone Company. People thought they were mad. But the building still stands today. It’s a pizza restaurant. I first read about it in a book about five years ago. The early recordings were mainly music hall stars of the day, people like Bert Shepard and George Mozart. As far as I can tell, they’d get uproariously drunk in Rules restaurant a few doors down, then go and record into this bonkers contraption.

How much procrastinating did you do each day? 16 cups of teas worth?
Oh, 20 cups! No, it varies. I’m pretty disciplined. You’ve got to be, really, if you work from home. The worst time is if it’s really hot – the temptation to go outside is massive. When I wrote the early drafts of The Industry of Human Happiness, I used to set myself minimum word counts every day. Otherwise it would take yonks.

Why did you set this thriller in the age of capes and top hats and monocles and dastardly types – oh I think can maybe see why…
One of the challenges of writing historical fiction is to find fresh ways to look at old things. So, yes, when you say ‘Victorian’ I guess people may initially think of capes and top hats and monocles. But I hope I’ve swerved most of the clichés. The flip side is that you can’t totally reinvent a time either. You have to write things as they could have been. It’s a balancing act, I suppose. The key is to remember that these people didn’t see themselves as ‘historical’ figures; they thought that they were at the cutting edge of modernity at the time. If you can inject a sense of newness into your writing, then it’s easier to swerve the clichés.

How much of did your day job as a music journalist help you with this book?
Music writing, as with music itself, is all about magic and passion. So I hope I’ve injected some of that into my novel. Being steeped in the music industry also gave me a good sense of perspective about what I was writing about. It has also helped now the book’s coming out: I’ve had some great support from people within the industry. It’s an exciting time.

The Industry of Human Happiness is out on 24 May. You can pre-order it here.