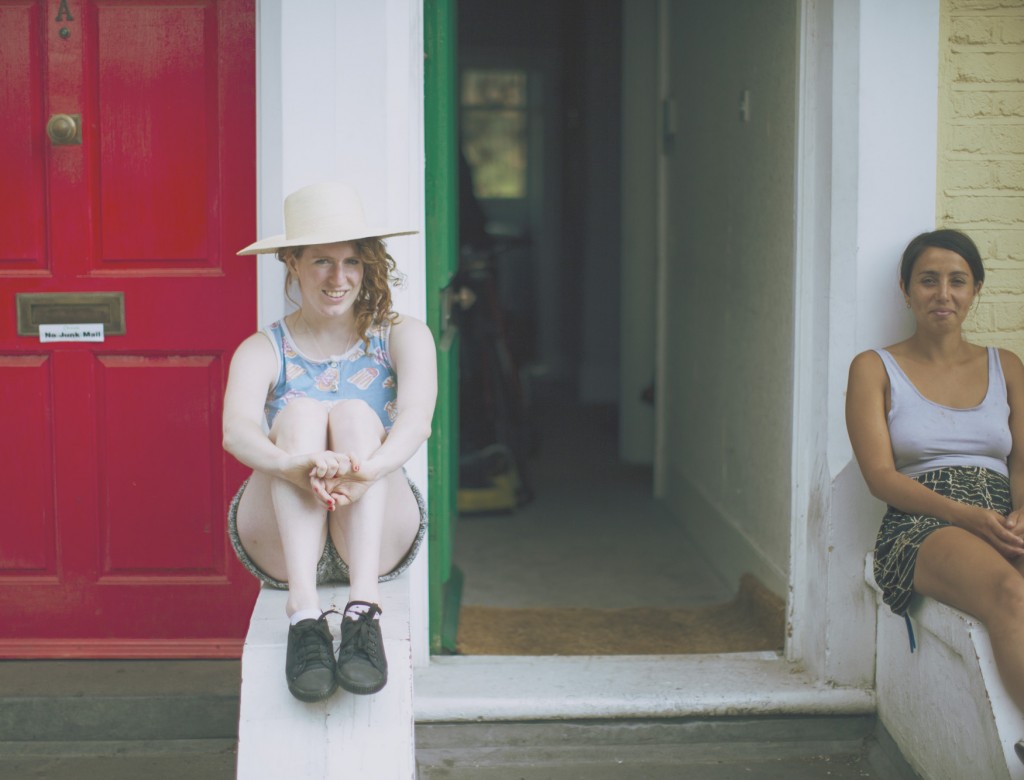 Luisa (on the right) and Heloise (on the left) are singers and multi-instrumentalists in the excellent band Landshapes. They make big sounds, riotous tunes with mournful melodies and their album (which is getting lots of stars across the music press) is out now. Josh Jones had a very quick chat with them on the stoop of their house and only briefly mentioned the fact they made a viral hit with over 4.5m hits.

Nice! Your excellent album ‘Rambutan’ is out now – where were you when you first saw a real life copy of it? And did you play it there and then or are you like ‘I know how it goes, I’ll save it for now’?
L: We first got copies the day of our launch, a big ol’ box of ‘em – it was pretty exciting, but not really the right time to play it there and then. They do feel like old songs to us now so yeah, we know how it goes and all but I’ll still listen to it; I’ll listen to it and try and imagine how it might sound for the first time, probably because I’m aware and nervous of people doing just that.
H: Once is enough, otherwise I just start hearing stuff I want to change.

You’ve been playing in a band together for years, have you two ever had a blazing row about a song? Like a real doozy of a shouty match? Were doors slammed? Or are you just a peachy pear of friends and that doesn’t really happen?
L: We nearly fell out over G Sharp. Heloise has a love for dissonance and crazy time signatures, often it can be the thing that makes a song but then sometimes things just sound wrong! Anyway, she insisted on keeping this completely out of tune bass note in a new song called Palindrome and it took weeks of persuasion and the whole band for her to take it out… no slamming doors but you can be pretty obtuse through an instrument and sulking. Anyway, months later I’ve realised I miss that G Sharp, I’m too proud to tell her though. Hey Heloise.
H: Don’t worry though, I soon had my revenge when it was suggested to cut a few bars from Luisa’s verse melody in our new song, Solipsist. This was met with great resistance, diplomatically we tried out both versions (long and short) until the band decided on the shorter one. Luisa, still fuming threatened to write a line in the lyrics to the extent of ‘they’ll cut you short …dicks’. See whether you can spot it!

Anna Kendrick famously borrowed your ‘cups‘ routine for the film Pitch Perfect. Did you meet her? Would you like to meet her? If you met her, what would you say to her? Would you do a cups off? She seems like she’s quite nice.
L: She does seem quite nice doesn’t she? But her voice makes me feel a bit sick – sorry. I don’t think I’d want to meet her because she’d probably be all nice and I’d just be thinking about how her voice makes me want to vomit. But maybe we could have a cup off, I bet she can’t do it backwards!
H: I can definitely beat her on cup size.

So where can we buy Rambutan?
Ah yes, all the usual places, amazon, itunes, Rough Trade … you can get all the physical stuff here.