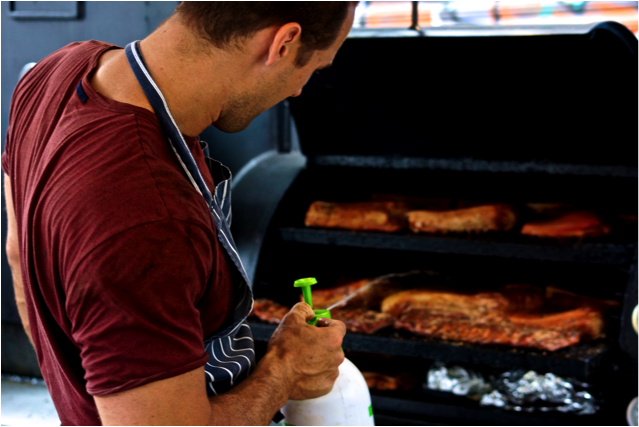 Most of us probably have a fairly limited understanding of the art of smoking meat. Pitt Cue Co have done their best to educate us but I have to concede that until quite recently, I was a huge fan of sacheted smoke flavouring and wouldn’t have thought to be ashamed of it.  The Big Smoke is lagging and the irony is not lost on David Carter.

The first obstacle is space. Smokestak is a goliath, especially for what is; ostensibly, a street-food vendor. The 30-inch diameter smoke chamber can be accessed through four separate doors. In a city as dense as London, it is not hard to see why industrial size smokers are a rarity.  It soon becomes clear that furthermore, the discipline involved in the preparation requires a rare level of commitment.

David barely stops moving while I am with him. He recounts his daily routine in snippets over his shoulder as he tends to the product. Every day he is up at 5am to source the meat from local markets. The firebox must be lit and bought up to temperature (270-300F). The rub must be mixed so as to perfectly balance the salt and sugar. David assures me this is the only mystery behind the creation of a great rub, ‘the rest is myth and personal taste’.

The meat must be prepped before being placed in the chamber. The BBQ sauce is smoked in the same chamber as the meat. And, once everything is stacked in the smoking chamber, the real work begins. I witnessed the labour intensity of the process as David and his team darted around me. Temperature and moisture maintenance is crucial. The former is controlled by airflow regulation, the later by spray guns filled with apple juice, which I desperately wanted to play with. David wouldn’t have found it funny, and he’s bigger than me, so I abstained. ‘We reapply the rub if needed and the fire box must of course be kept stocked with wood’, he adds, wisely placing the spray gun out of reach.

On a normal day, David will go through 150-200kg of wood. He has experimented with a number of different variations but cannot find anything that beats English oak. When the meat is removed from the smoker it is glazed in BBQ sauce and grilled for just a few minutes to create a caramelised bond between the meat and the sauce. I’m not prone to gushing, and I do not, as I said, have a huge basis for comparison, but these are the best ribs I’ve ever eaten. ‘It’s time’, he says. ‘Time and space.’ London may require something of a paradigm shift to facilitate that, but it’d be well worth it.

Details of Smokestak’s next location will be publicised here.