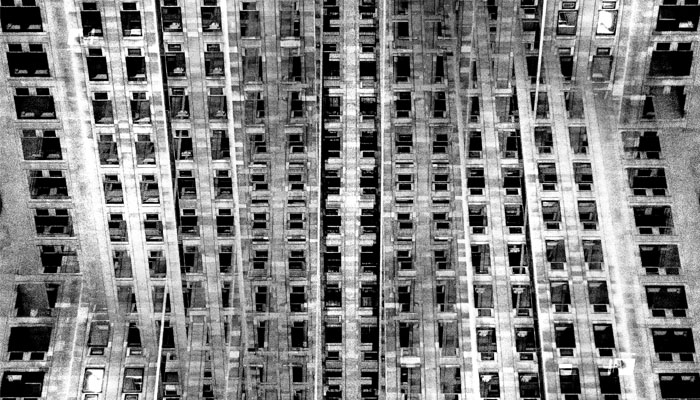 Photographer Lewis Bush’s photo project Metropole has taken London by storm this week – his dystopian future imagery of the skyscrapers of the capital give the city a dark, moody feel. You can buy the book here, check out his website here or see them in real life at London Arts Board here.

Hey Lewis – how’s it going? Up to much?
Hey Josh, it’s going good, just a little crazy. The response to Metropole has been amazing, I’ve nearly sold out of books in less than 48 hours and it’s been a full time job packing them up, sending them out and dealing with e-mails and press queries along the way. It’s been fun though!

Soooo – have you watched Blade Runner?
Haha yeah a few times, I’ve heard that comparison quite a bit with these photos. Also Metropolis, Neo-Tokyo, Babeldom. All those sci-fi mega-cities. I’m a fan of them all so I guess it’s a nice compliment to get from people.

Are you a fan of the massive amount of skyscrapers we’ve got/are getting in London? On the one hand you get to take brilliant photographs of them, but on the other, well they’re horrible massive middle fingers of capitalism.
Thanks but no I’m absolutely not a fan of them. I’m not against change, far from it, but these buildings represent change for a minority at the expense of everyone else. No one asked if I wanted to see a building like the Shard every morning when I leave home. As you say they’re a giant middle finger, a reminder that more and more of us can’t afford to live in this city.

How did you get the high up shots?
I did my homework and found a few towers in the city that I could go up, but also used a few visual tricks to try to make it seem like you’re higher than you are. Almost all the photographs are actually shot at street level, and everything is done in camera, there’s no Photoshop trickery.

Where can we see more of your work? Can people buy the prints?
More images from the series are on my website and books are available in my store. Some unique screen prints based on the photographs are coming soon, if you’re interested in one feel free to drop me a line through my site and I’ll get back in touch with more details.