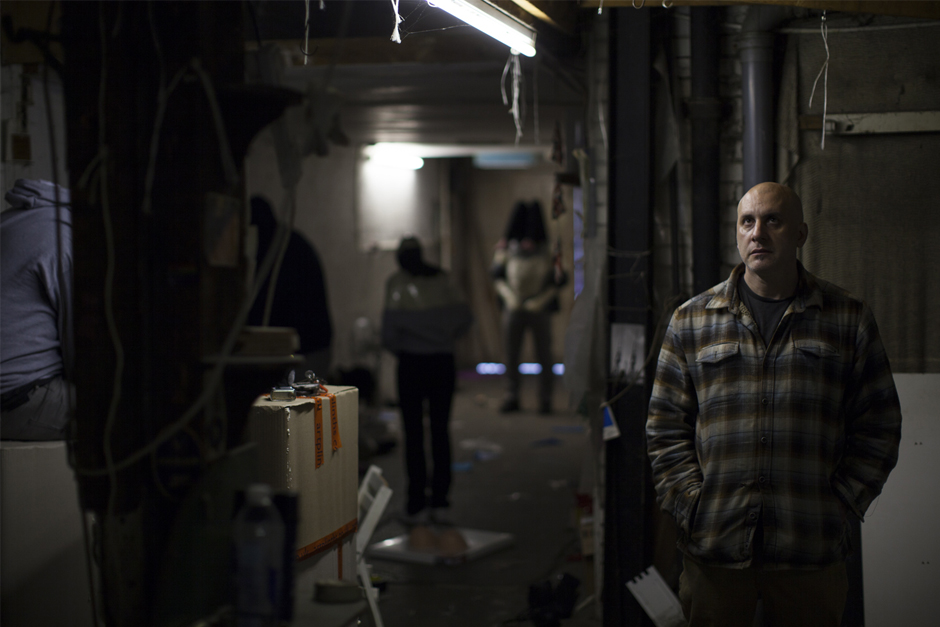 Mark Jenkins creates disturbingly real, life-sized sculptures. He and his collaborator Sandra Fernandez clone themselves out of many layers of sellotape to create the unnerving pieces that are often shrouded in hoodies. You might have seen some of his pieces popping up on the streets in the last week or so and you will have definitely seen his Project 84 installation in collaboration with CALM and ITV to highlight male suicide by placing 84 hyperreal looking figures on top of ITV centre. His new show, ‘BRD SHT‘ is both sculpture and on canvas and opens at Lazinc in Mayfair on 25th May.

People are genuinely freaked out by how real your sculptures are – is part of what you do to intentionally make people uneasy?
There are kind of different ways you can go with it, you can go with the conceptual or the surreal. Sometimes it’s the raw effect of someone that looks like they’re alive standing somewhere in a weird space, and it starts to become very threatening. People feel threatened by the abnormality of that. They don’t know who’s going to turn around.

When people are going to see sculpture they think of marble figures so their mind is ready for that, not this.
Other sculptors that do hyperrealism tend to show their work through the actual skin and faces, but for me because we clothe everything there’s no real way to know that my pieces aren’t real. No matter how good you make a sculpture it’s still not going to breathe and the eyes don’t blink and you pick up that it’s not real on a subconscious level. What we produce is almost imperceptibly real.

You and Sandra clone yourselves to make the figures, why use your own bodies?
I’ve been working with Sandra for the past 10 years or so. We collaborate together but we’re also the models for the bodies of all the sculptures we produce. It personalises the work and I think that when you see it you see the people that made it so there’s a certain continuity there. It’s also cool for us as we get an out of body experience to see yourself in a gallery or on a street or sometimes when pieces get taken by the police.

Do you clone yourselves so you’ll always exist somewhere?
I feel a rapport with the sculptures. I can even be jealous of them because some of the collectors that buy them, their houses are really nice! It’s like, “you get to live here? Thats’ way better than me!” Also the attention they get – if I’m walking down the street no one really pays me much attention. No crowds form for me. The sculptures enjoy that level of attention.

You must have been expecting a big reaction to your Project 84 installation?
When you do something on that scale it’s like, if you make one of something it’s cool but if you make a hundred of it then it draws attention, it almost doesn’t matter what it is. If you put a thousand bars of soap in the street it’ll become a big, huge thing. I expected that the scale of the project and the location on top of ITV’s building so I expected it. It was very UK specific and when it went global virally it was still about the UK’s issue of suicide and it wasn’t about other countries.

Let’s talk BRD SHT – it’s not just sculpture at this show is it?
Yeah we’re going to have some canvases there too. The name BRD SHT comes from a Brewster McCloud movie where they were killing people with bird shit. Every time this Brewster character got threatened this angel lady had a crow that would shit on people and kill them. One of the sculptures will represent the failure of man to fly and there’s the idea that when you carry too much emotional baggage it can lead to your demise and suicide I guess.

Do you find people want to touch your sculptures more than they normally would because they want to convince themselves it’s not real?
Yeah that can kinda suck. These ones are lightweight so the moment you touch them they wobble it kind of ruins everything. People wouldn’t go up and touch a painting so there’s a big difference. And folk like to come up and take a selfie and when the pieces are on the street that’s a part of it but in a gallery that’s a little more iffy. I was at one show once back when I was making the clear tape people and some of their shoulders were kind of flat and I saw one woman who had her cup resting on one, using it like a drinks stand. At the openings of a show especially you kind of want to give the sculptures some sort of space.