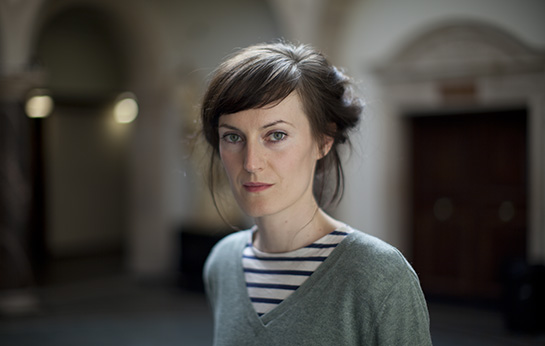 Melanie Wilson is a London based writer, performer and sound artist. She makes performances, installations, films and audio works that centre on the use of sound. She has written and directed (and is performing in) the forthcoming play ‘Autobiographer‘ – an evocative and compelling portrait of a 76-year-old woman’s life and her memories through the lens of dementia. It’s on at Toynbee Studios from 17th April – 5th May. Josh Jones asked her some questions.

How did you get into what you do?
I began to make my own work after finishing an MA at Central School of Speech and Drama in 2000. I meet some brilliant collaborators Emma Benson and Peter Arnold soon after, and together with the help of Louise Blackwell and Kate McGrath, things began to take shape.

Was writing a play about dementia pretty draining?
It was certainly very emotional and challenging to write and make the piece, but it was also ever so rewarding. Primarily I set about constructing a portrait of a woman’s life; an affectionate woman, living a full and vital life and who is lucky enough to have had a close bond with her family. This woman, Flora, also happens to have dementia, so whilst the effects of the disease draw her ever further away from herself, the performance works to draw the audience ever closer to the character, and this I think is one exciting facet of live performance that has made the experience of making this piece as thrilling as it has been tricky.

Did you find out any interesting and surprising facts about the illness when you were researching it?
I discovered a small percentage of people can begin to suffer from the disease as early as their 30s, and that many people can live quite functional lives for many years with the help of medication. There is a great deal of unhelpful and hysterical press coverage about the disease, which makes a first glimpse at it seem terrifying and irredeemable. It is a serious condition, but there is also lots that can be done to live well with it.

Have you eaten in the Toynbee restaurant? It’s stupidly great food.
Not eaten there yet, but have been taken by the coffee and the red wine so far!

How do you go about writing? Do you lock yourself away or wander the heaths and parks of London shouting the words into a dictaphone. Or, you know, some other way.
It really is a mixture of all of those things, minus the dictaphone. Southwark Park is very effective. If I have organised myself well, I can also go off for solitude and head wracking by the sea in north Devon.

What’s next for you?
Some very exciting new sound projects in Cologne and Berlin, and the making of a new solo show.