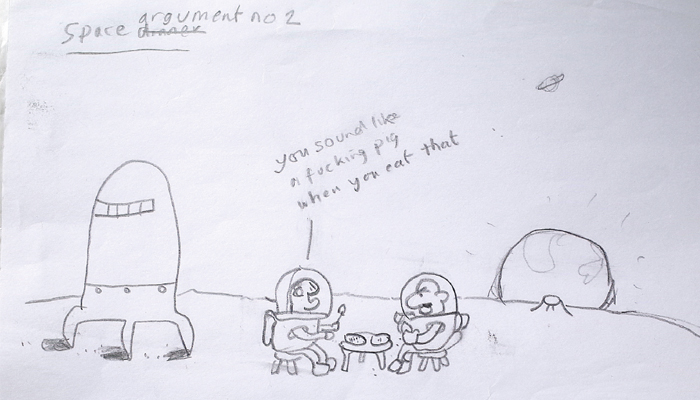 Jon Link and Mick Bunnage are the duo behind the excellently offensive cult comic and cartoon, Modern Toss. Josh Jones first encountered their work when he was selling and rolling their prints at the famous Santa’s Ghetto art shows back in 2004 and, as the pair are celebrating their 10th anniversary of working together with a book and show title ‘Modern Toss: a decade in the shithouse’, he went along to say hello as they hung their exhibition at Forge & Co in Shoreditch.

You started at Loaded Magazine way back when.. Was it as fun as it sounded?
Mick – Yeah it was a good laugh. It was a rock n roll magazine. It was the only authentic rock n roll magazine.
Jon – Unless you were involved in the part of the magazine that had to stay there until one in the morning the day before it had to go to print. But it was a good laugh.

I worked at Santa’s Ghetto 10 years ago when you started and have rolled many, many of your prints. Did you have any idea you’d still be doing it a decade later?
Jon – We didn’t really think about it – it’s gone fairly quickly hasn’t it?
Mick – You don’t really think about it. We’ve always just done one thing, one stage at a time. You just do what’s in front of you. The first thing was the first comic and website so we din’t have a ten-year plan! That would have gone tits up.

Who decides when something is done or good enough?
Jon – We’ve both got a sense now. We both chip away at it.
Mick – We now know when something’s going badly wrong and have to leave it.
Jon – But we’re quite fast now, we’ve got so many pathways in our brain that lead to a joke that we can sort of work quite quickly.
Mick – That’s true actually, we’ve streamlined the joke thinking up process as we’re a lot better at knowing what each of us is going to laugh at. You have to sort of get into that and now we can just come up with stuff that we know is going to work. If it’s obviously shit you get a pretty good feeling about that early on.
Jon – Having said we do like to experiment with some weird bits every so often.

Have either of you ever come up with an idea that has made the other leave the room and not speak for a while?
Jon – There are quite a lot of folders of things that aren’t right.
Mick – How much of that do we throw away?
Jon – No that much, we do like to use everything we come up with or recycle it or hack lumps off it and stitch other bits on. That’s quite important but there is a sort of folder full of things that should just stay there.

Have you found you’ve got things that you thought were a bit much maybe eight years ago, that would be perfectly fine to use today?
Jon – Definitely. Things have really shifted for the worse!
Mick – What are you thinking of?
Jon – Well I remember when our first comic came out, places wouldn’t stock it. Now you go into WH Smith’s and in the top 10 books you might find for instance, Frankie Boyle’s ‘My Shit Life So Far’. That’s a WH Smith best seller. That’s how far we’ve come.

As you get older, which we all do, you can’t do anything about that, have you found you’re a bit less caustic? Or a bit more?
Mick – I think we’re just as bad as we ever were. We’re kind of exactly the same.
Jon – It’s now harder to do a lot of drinking during the week, so that probably has some kind of effect.
Mick – We have tried heavy drinking with jokes. It doesn’t always work.

Do people expect you to be a lot angrier when they meet you?
Mick – Yeah, they do. They get really disappointed when we don’t insult or swear at them. People think we’re going to call them a cunt straight off and are surprised when we don’t. People love to be insulted.

Modern Toss: a decade in the shithouse runs from 2nd – 19th October at Forge & Co in Shoreditch.