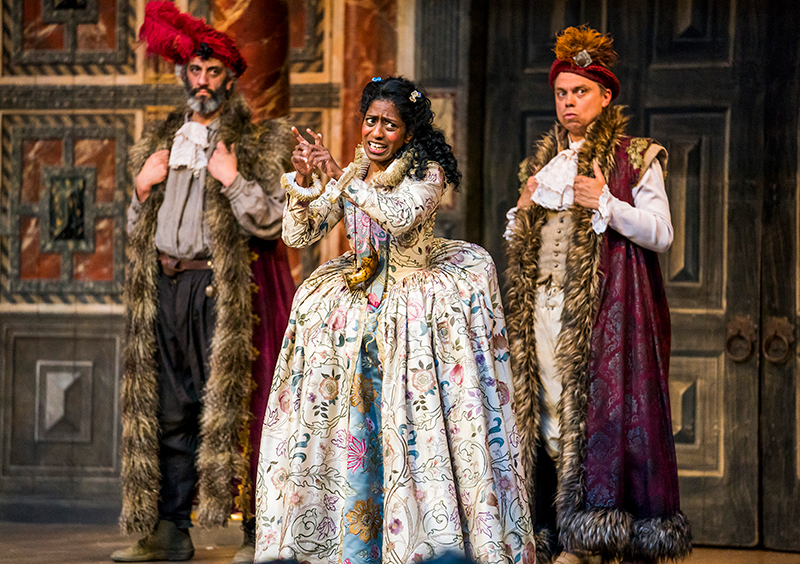 By wendy in Feature

Summer’s here, the BBQs are out and it’s time to party like it’s 1599, y’all. If, during this fleeting sunny season, you’d rather spend your free time somewhere that’s not a packed food market or a rooftop bar that’s usually a car park, head to the riverside, where the riotously funny As You Like It is tearing down The Globe’s metaphorical ceiling.

I’d admittedly not dabbled in any Shakespeare since a year 9 drama class, in which I’d played a lacklustre Puck, due to my rattling nerves and unwillingness to do any form of public speaking. Shakespeare, at this point in my life, was not my friend. But after learning that two of my favourite films – 10 Things I Hate About You and The Lion King – were adapted from The Taming of the Shrew and Hamlet respectively, I decided to reacquaint myself with his work. Shakespeare, when done right, can be fun, flirty and downright side-splitting.

Michelle Terry’s bang up to date production of As You Like It offers a gender-neutral approach – with a 50:50 gender ratio to the 12-strong ensemble – which makes for some superb casting. The fair Rosalind, daughter of the banished Duke, is played by the wonderful Jack Laskey, with his intense swooning for Orlando verging on the slapstick, to great effect. Top marks for makeup too, with Rosalind’s bright white foundation and rose dust lipstick channelling an Elizabethan-style Miz Cracker.

Another genius casting decision is Nadia Nadarajah, who uses British Sign Language in her role as Celia, adding depth and nuance to a character I’d previously considered just a sidekick to her limelight-hogging cousin, Rosalind.

Pearce Quigley is also fabulous, playing a comedically deadpan Jacques, reminiscent of Russell in The Detectorists (anyone for a metal detecting app?) There’s an excellent scene in which Jacques begins the famous ‘All the world’s a stage’ speech while scoffing a banana, showing that even Shakespeare’s greatest lines benefit from a touch of comedic toying.

To get the full Globe experience, we popped next door to The Globe’s restaurant, The Swan, after the show. While taking in stunning views of the Thames and St Paul’s (does that view ever get tiring?) we ate our way through three delicious courses. The menu is perfect for either a pre- or post-meal dining experience, with each dish fresh, refined and achingly beautiful in presentation. The floating island dessert in particular is a marvel, with airy meringue topped with pistachios and other lovely sweet things. Our red wine went down a treat too – hey, it was a Sunday afternoon – and topped off an all-round stellar day. As you like it? It certainly was.

As You Like It
Booking dates up to August 26th 2018
Shakespeare’s Globe, 21 New Globe Walk, E1 9DT
Book Tickets