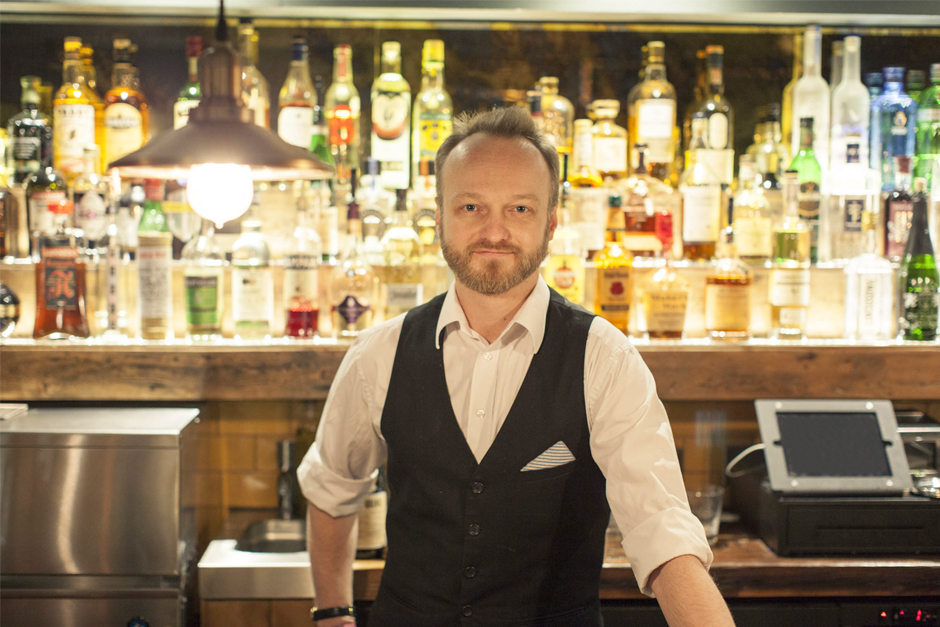 If you’ve ever had a cocktail in east London then you’ll know Oskar. One of our capital’s best, and favourite, bartenders, his friendly approach and skills on the tins have made thousands of people’s nights. Six months ago he opened his first bar, called Found on Ravey St, and told us to wait ’til he’d got things sorted before interviewing him. He’s ready now. Go get a drink off him tonight.

Now you’ve got your own bar to run, have you imposed any house rules?
The whole idea is to be professional but informal. I’ve always thought that people have limited resources and time and they’re choosing to spend it with me, so we should honour that and make sure that they’re having a good time. The main components at Found are that you can’t be too loud, as it’s kind of a small space; you can’t hit on anyone more than once – you’re allowed once, it is a bar after all – but take a hint. If you don’t take a hint then very quickly that guy or girl will become my partner or sister or cousin; and finally, I don’t care how much money you spend, everybody here gets served when it’s their turn. There’s no favouritism here. And that seems to be working – people are booking half the bar for parties – sometimes on just word of mouth.

What’s your house drink Oskar (can I have one)?
One of the investors in the bar’s wife used to live on Old Nichol Street, just around the corner, so I came up with the Old Nichol – it has gin, Antica for sweetness, maraschino and stuff like that but his wife is also Argentinian and they love fernet, so I added a bar spoonful of that, which gives it a slight underlying bitterness.

Do you get people trying to impress their Tinder dates here?
We got some reviews that we’re a great date place and there is a kissing corner here, so we’ve had a lot of first dates in. There seems to be a trend of people ordering for each other, saying “what do you think I’d like?” which is hard because it’s a first date, who knows what you like? Whatever you order, that’s what you want. People come in and apologise for asking for a glass of wine because we’re a cocktail bar. You’re asking for it and paying for it and drinking it – whatever makes you happy then that’s what you shall have. Don’t apologise.

What if I get hungry (and need to soak up the drink)?
We sell snacks but I let people order food in – as long as it doesn’t smell too strongly, so curries and fish aren’t really welcome, but people order pizza and then other people see them order it and start talking and either order one for themselves or get offered a slice and then everyone makes friends.

If things go wrong and there’s an apocalypse can I come round?
Of course! We’ll shut that big metal door and if we’re all going to die then we might as well die here surrounded by all this, having a great time!