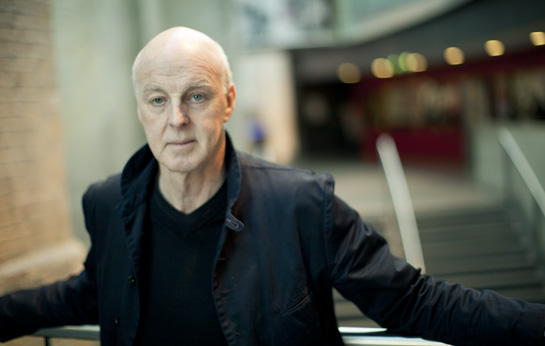 By Chloe McCloskey in

London-based actor Tony Guilfoyle is currently appearing in Robert Lepage’s remarkable, much shouted about, 360-degree Playing Cards 1: Spades at the Roundhouse. If you haven’t seen it, leave your computer and go. Right now. He managed to find a few minutes in his hectic schedule to chat to Josh Jones.

Hey Tony, how are you? A bit knackered?
A touch. It is a very physical show for the performers, not so much the acting, but negotiating the set, which we are locked into for the course of the show. It is like a giant snare drum in shape and only about a metre high, so getting in and out of a full Las Vegas Elvis costume whilst lying down under is testing, while the crew whizz around on little wheeled buggies feeding the different sets up and onto the stage. So when we do emerge up through the trap doors, like jack-in-the-boxes, it’s a liberation.

How intense have the preparations for this play been?
The preparation has been intense and is still ongoing, as with all of Robert’s shows. The gestation period has been over two and a half years, starting with a week or two around a table evolving ideas and themes then about two months of rehearsal dotted throughout that time with a mock up of the set and then the actual set to use throughout that entire time. Mostly in the Caserne – Robert’s studio in Quebec city. During that time we would have about three private showings of the work to date, with feedback. But it really is a group process, so that as we perform now it is owned by the whole company, not just the actors but the entire ensemble, it is a very special atmosphere creatively.

How do you personally, prepare for a performance?
We would all be in the theatre at least two hours before. You have to make sure you are fuelled up for that duration of show and relaxed, rested. Here during the previews we were playing with changes, trying to clarify story lines, experimenting. And that process will continue as we feel we have a way to go yet.
But cycling from Hackney, where I live, to the Roundhouse is a good preparation. Trying to stay alive focuses the mind and is strangely relaxing.

Are you a big fan of playing in the Roundhouse? It’s quite a unique venue for theatre.
I love the Roundhouse, it is a very special venue for me with a great and varied history of performance and music. I was at the Drama Centre (my drama school) just around the corner from 1970 to ’73. They would have wild Sunday events called “Implosions”, where you could see bands like Dr John The Night Tripper, the Stones and then bump into Andy Warhol on the stairs. And our set looks fab in there.

Do you like doing theatre in the round?
It is rather liberating actually. Also for an audience they see themselves and are communing with each other, not just a stage set, as they would at the birth of story telling around a fire.

Which bit is your favourite part of the production?
I love it when I get to walk on the set in the final stages of the piece (we spend quite a lot of the time half in view from the waist up) but then the story takes us into the desert. Both the actors and the audience are freed from the hotel interiors and there is, for me, a great sense of open space.

Are you any good at card games?
No I get bored, I like to win but can’t be assed. I once performed in a show set around poker called Dealer’s Choice by Patrick Marber. The rest of the all male cast became obsessed by the game and played constantly. Patrick came to see the show – he was a poker fanatic even playing on tv – and the cast organised a big game to test themselves against the pro. But sadly I won, beating them all, the other actors were very angry with me.