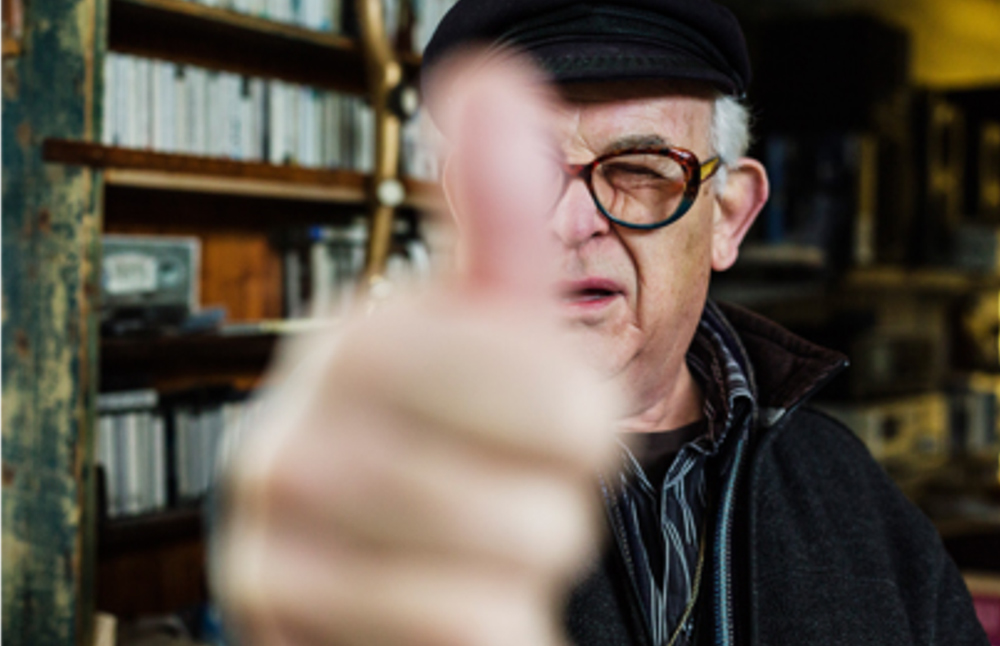 One of Britain’s best loved artists, Ralph Steadman has one of the most distinctive styles in the world. His new show Printin’ Backwuds opens on Friday at Lazarides Editions and Josh Jones’ chat with him started after Ralph played a song he wrote about Zeno, his square-eyed sheep…

A square eyed sheep? That’s a bit weird.
It’s very weird. It was a square pupil. Then somebody said to me that all sheep have got square pupils. And I didn’t know that.

Is that true? I’ve never looked a sheep dead in the eye.
I’ve never thought to look it up.

Why did you decide to do the Printing Backwuds show?
It was the title. We came up with that title because I’ve done a lot of printing using wood letters. I bought up a whole studio, a whole business, a man’s life. I had all of this wood type so I thought we could call it Printing Backwuds and take photographs of the actual wood blocks. They’re probably pre-war. They’re all cut by hand.

Is the exhibition a retrospective or a collection of works you have that people haven’t seen?
It’s a lot of things. I’ve got a new book about to come out called Nextinction so it will be doubling as a launch for that too.

And you’ve got some brand new prints too?
Yes I have – there are four of them, which have been printed at Lazarides’. They look great, they’ve done a terrific job. They’re all from Nextinction; they look almost like an etching. There will also be a new, vintage Dr Gonzo sculpture there, which was done by Jud Bergeron.

And you’ll be exhibiting work which has been shot by William S. Burroughs?
Oh yes! I was with him and he used to carry a little revolver in a holster. We put a silk screen picture I’d done of Hunter S. Thompson up and I told him it had three places on the print which were the target. One was Hunter’s sheriff badge, the second was his Rolex watch and the third one between the eyes. So William only went a few yards back and he went BAMBAMBAMBAMBAMBAM! And shot off all six bullets at once. They went through the print but they didn’t hit anywhere near where I told him. I said, “I think you’ve missed, William.” He replied, “well he’s dead isn’t he?”

Have you seen that the Bank Of England is thinking of putting a contemporary artist on the £20 note? Who would you like?
One of my big heroes is Francis Bacon. I was actually reading in the Radio Times recently a piece about who would we put on a bank note, I think Francis Bacon would be a terrific choice. I do hope they don’t choose Tracy Emin. Maybe Antony Gormley would be alright. He’s quite interesting.

Your work can be exhausting to look at sometimes with its savagery and emotion – does it exhaust you to create?
Ermm, probably – I’m trying to think what. I do care a lot about what I’m doing, so I think it’s more emotional exhaustion. I’ve still got energy – I still swim every day, so that’s something! The Blot Symphony exhausted me – I filled a book with blots as notes and I performed it once in France. That was exhausting!

Have you changed the world enough with your art? You said that’s what you want to do.
I’ve succeeded. It’s worse now than it ever was. Definitely worse. I think it’s become terribly repetitive and rather idiotic people believing silly religious ideas that are being put into practice. I wanted people to have fights with custard pies and get rid of their anger just through that. That would be terrific – you just get a huge space somewhere like Times Square and take it over for an hour and really go to town and slap custard pies around.