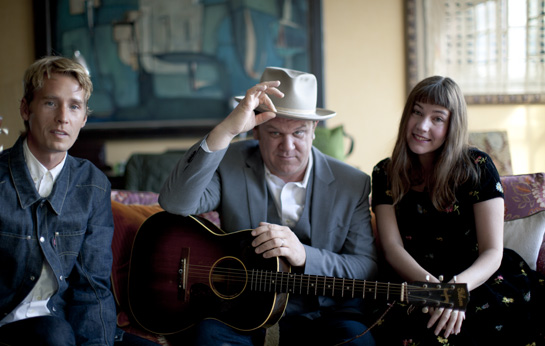 This may be an interview with John C Reilly, but this interview is entirely about his bluegrass band, John Reilly and Friends. He is seriously into his music and they’re signed to Jack White’s label Third Man Records. They’re over in the UK and are playing a one-off show in the hyper-hyphenated St Giles-In-The-Fields Church on Thursday (7th Feb). It’s being put on by our friends at Black Cab Sessions and they asked if we might be up for an interview. We were like, umm yeah, so Josh Jones got up early as John rang him from LA to talk about the show.

Why are you playing in a church in the middle of London?
Musically we do a lot of acoustic stuff around a single microphone and we do old folk music and old traditional bluegrass music and old country duets and stuff. The better the acoustics, the better the show. For some reason we’ve done a bunch of shows in churches in America that came about just randomly and we’ve had good success in them. I think it’s partly because of the acoustics and partly that being in a sacred space – regardless of your religion or your belief – it allows for something special to happen I guess. We’ve done lots of shows in typical punk rock venues and clubs that are used to very loud, amplified music and it’s always a bit more of a struggle to get people to focus. I’m a big fan of how it feels to be in churches. It somehow feels very optimistic and, as I say, regardless of your religion, there’s a real feeling of community that happens when people get together in a church.

You’re doing the show with le cool friends, the Black Cab Sessions guys – who I believe you met in America with Jack White a few years ago?
You know what’s very telling about the Black Cab Sessions? It’s who they DON’T have, I really love the level of taste with those guys. Every time you watch one of their pieces you know the quality level will be very high. I’m a big fan. It’s a brilliant, brilliant concept.
We hooked up completely by accident. I don’t know if you’ve seen the film they did in the parking lot? I was in town in Nashville with Tim and Eric on a comedy tour and I’m friends with Jack White who told me he was shooting a video and to come down to this amazing record plant. So I came down to this vinyl record plant and all of a sudden this black cab pulled up in front of me. I was like ‘Oh my God! It’s the Black Cabs Sessions people!’ I had no idea they were in America. I ran up to them and they were like, ‘You know who we are?!’ Of course I knew who they were. Anyone who knows anything about good in music knows who you are. They asked ‘Would you be in one?’ So I jumped in the cab and introduced Jack’s segment. I saw them again when I was in Austin, Texas at SXSW with the band and I mentioned to Chris Pattinson that I have this band and we’d like to come over some time and shooting a Black Cab Session with us and he said, ‘Yeah’.
It’s very easy to set up a show with a big, corporate promoter, but to have something special and have it feel handmade and lovingly presented in a really special place like St Giles-In-The-Fields Church… I feel really, really lucky.

Are you going to do one of their taxi sessions while you’re over here? It’ll be a bit more comfortable with just the three of you here.
I think so. I hope so. It won’t be like the Brian Wilson session where they were all crammed in. I haven’t asked them this yet but I wonder if they were inspired by the famous black cab ride with Bob Dylan and John Lennon. Have you seen that? It is a-mazing. It’s like seeing fucking Superman and Spiderman sitting in the same place talking to each other. It’s like ‘What? How is this even happening? Bob Dylan and John Lennon?’ And it’s not just them talking in a cab. They’ve been up all night long and John Lennon’s smoking and Dylan’s getting all sick – you can see him practically turning green even though it’s in black and white. It’s out there. You should look it up. I would be shocked if they haven’t seen it. It’s an outtake from ‘Don’t Look Back’. It’s incredible to see those two together.

I heard there can be up to eight of you in the John Reilly and Friends group? That sounds busy.
There are eight of us in the band, but unfortunately Disney won’t pay eight of us to come. That’s how I’ve set this up and why we’re able to do so few shows and be able to afford to pull it off because I’m there for a press tour for Wreck-It Ralph that I’m in. I’m allowed to bring a companion with me so I convinced them to let me bring Tom Brosseau and Becky Stark. It’ll just be the three of us around the microphone with our guitars singing some sweet harmonies and kinda of doing a seance for old music.

Is it nicefunweird being with your band when acting is kinda lonely?
I love it. I’ve done a lot of theatre too so there’s always a communal feel when I’m doing theatre, I love it. I can’t tell you how lonely and depressing it is to be alone on a press tour. It’s just you and a bunch of publicists who just met you at the airport and you’ve never seen before and then meet journalist after journalist asking you the same questions about something you did eight months ago or something. It’s so nice to have your friends there in the room, be able to play music with them and make an adventure out of it. I’m really excited about sharing this music with people in England and Ireland and Scotland. I think it’s going to be a really interesting sociological experiment. A lot of the music we do is old, traditional folk songs and old Appalachian bluegrass stuff. It comes from England and Ireland and Scotland. This is what they were singing on boats and then they ended up coming to America and settling there and this is what it turned into. It’s the American invasion, Josh.

As you say, you play a lot of Americana/country/bluegrass music. How did that come about? Aren’t you from Chicago’s Southside? I wouldn’t associate that with that music.
Yeah, well I was raised by a very Irish father who played traditional Irish music all the time. So there’s that. I don’t know – if you look at people in the band – and this is true for all country and roots music, people are from all over the place. There’s this guy Willy Watson who plays with us sometimes and was in the Old Crow Medicine Show and he’s from like upstate New York, but you’d swear that he was born in some hollow in Appalachia. This music speaks to you and you’re hooked, for whatever reason, I dunno! I think personally I’m into this music now is because I’m at one of those midway points in my life and I’m starting to think ‘I’m not gonna last forever! What is gonna last forever? Well this song has lasted a long time. Why are people still singing this song? What is it about this arrangement of notes with these words that makes people remember it forever and ever?’ Even when there’s so much new music. What is it about these haunting melodies, you know?