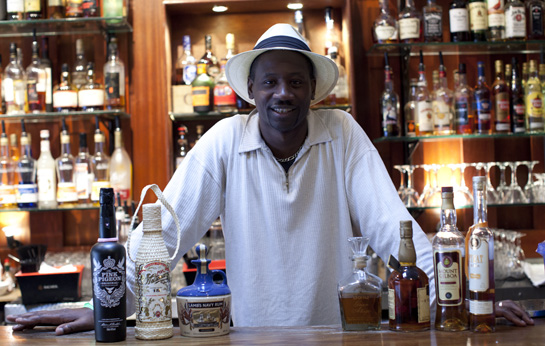 Ian Burrell knows rum. Like really knows rum. Not only does he own one of the best restaurants in London with (with the best rum cocktails) Cotton’s in Camden, he’s the worlds only global rum ambassador and is the founder of Europe’s only rum festival UK Rumfest (which you’ll hear all about from us nearer to this year’s one in October). Rum is his thing. He’s just got back from New Orleans and Josh Jones had a yarn over the bar to him to find out more.

Hey Ian – how are things? What were you doing in New Orleans?
I was in New Orleans for the Tales Of The Cocktail, the world’s best spirits event. And I don’t mean ghosts.

Do you die a bit inside when people ask for a rum and blackcurrant? Or is that a perfectly fine drink to order at a bar?
Hey, as long as people are drinking or asking for rum I’m quite happy. Even if they have rum on their cornflakes, I wouldn’t look twice.

Is it lonely being the world’s ONLY Global Ambassador for rum? What does that entail? Do you have small wars with vodka ambassadors?
No, on the contrary. There are many rum ambassadors who travel around the world, drinking rum then telling everyone they meet how great rum is. But only one who gets paid for doing it. I also conduct a few rum seminars, judge cocktail competitions and conduct rum tastings too. I never have any wars with Vodka Ambassadors… they’re too busy working on the latest way to market their colourless, odourless and tasteless liquid.

We got given three cases of Zacapa for our wedding and our super bartender friend Hannah Lanfear – also friend of le cool and friend of Cotton’s, I believe – turned them into the best tasting drink ever. Is there a better rum? Because if there is, I want to drink it.
Zacapa Rum… Very nice. And Hannah Lanfear is one of my favourite bartenders in the world as she always makes me laugh and she loves rum. Is there a better rum? Yes. The one in my glass. The next one and a free one.

How do you split your time between Cotton’s, Rum Ambassadoring and running UK Rumfest?
Cottons is pretty much run by my sister and my nephew, so I just oversee things. This gives me time to travel the world to spread the gospel according to rum and organise the worlds biggest Rum Festival, UK RumFest.

Finally – what are you drinking? I’ll get you one.
What do you think? And get me two!