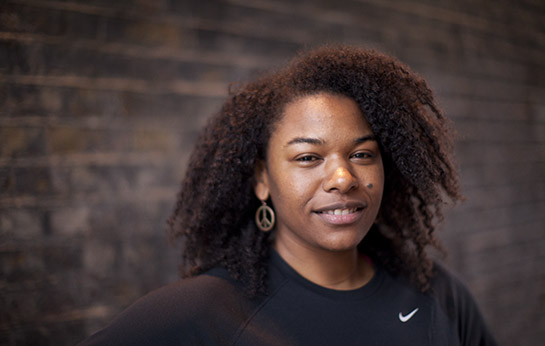 Josey Rebelle is 1) a properly funny person 2) a properly awesome DJ who has a show on Rinse FM every Thursday/Friday, 3am – 5am and 3) a member of east London’s Run Dem Crew who go running through the streets of Hackney in all weathers. Josh Jones had a quick chat about what she’s up to.

What’s the best bit about London Josey Rebelle?
That bit on the tube where you spot a mouse running towards you on the platform but then the train comes and you jump on the train and the mouse is left behind on the platform and life is just great after that.

So tell some people who might not have listened to your show, why they should listen the hell out of your show?
Every week, people email to say my show has got them pregnant. It’s filled with music that gets you hot under the collar, and it makes people do things. Naughty acid house and rare groove-flavoured things. But listen, I can’t be held responsible for that. I’m just the messenger. I’m like an Ann Summers shop, but instead of pressing buttons on the till and giving people change, I press buttons on the magnificent wheels of steel and make a change, in people’s lives.

Now I know you’re in Run Dem Crew – do you sit and waste hours trying to make the perfect running mix? Or do you just shove it on shuffle and see what happens?
How dare you imply that music could ever be a waste of time when music has done so much for you, Josh Jones? When you were down, who picked you up? Music, that’s who. When you needed an energy boost, who recharged the batteries of your soul? Yes, Music. When people pointed, when they stood in a big circle and called you names and tugged on your pubes, it was in Music’s sweet arms that you sought shelter, was it not? Don’t say bad things about music, man. I ain’t having it.

If you forget your kit at Run Dem Crew, do they make you do it in your vest and pants?
No, because seeing me in my vest and pants would just be too much for the Run Dem massive to take. Women would instantly want to be me and men would instantly want to be with me. I’d be, oh man, wait for this, I’d be RUNNING through their minds all night. Ah, I love running jokes, they’re great.

When you’re not running or doing your show, what do you do?
In the daytime, I put words together into nice sentences for people to read. I could have just said ‘I’m a writer’ but I like to be an enigma about these things. That’s basically what I do when I’m not disc-jockeying or running, I just go around being an enigma and stuff.

Is Plastic People the best place to dance? Please show your working with your answer.
Plastic People is a great place to dance, it really is. But picture this: a club where your favourite DJ is playing all the music you love most in the world. Turn to your left, look, there’s mama. Turn to your right, ah yes, it’s the man of your dreams. Hey bartender, do you take cards? Oh, all the drinks are free? Wonderful. Let’s dance, let’s dance the night away. Sounds like a great club, eh? But wait: I just painted that club in your mind. The brain is the greatest nightclub we have ever known. I think it was Socrates who said that.