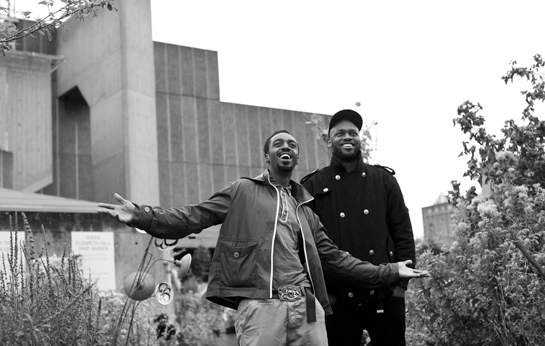 Kai Gama and Dr Sydney Velvet (DSV) are brothers. They’re also singers, songwriters, MCs, producers and multi-instrumentalists. And they’re also known as The Insomniax. The pair have just released their debut LP ‘Love She Wants’ on art-led record label and London collective Earnest Endeavours, to critical acclaim and stand to shake up the world of British hip-hop. So Josh Jones asked them a few questions.

Of course. Why Insomniax? Can’t you sleep because you’re too busy making music or because you’re playing your music too loud?
DSV: A bit of both.
Kai: Also because, after midnight was the only time we could get in the studio.

You’ve just released your debut EP ‘Love She Wants’ and it’s been described as a ‘new sound and vision for modern hip-hop emerging out of London.’ How does it feel being thought of as a game changer?
DSV: It feels amazing, really great, especially since I don’t feel like we’ve really scratched the surface yet – conceptually, musically, there’s a lot more to come…

What’s next for you?
Kai: We’ll be taking the EP on the road and developing the material for our debut album.