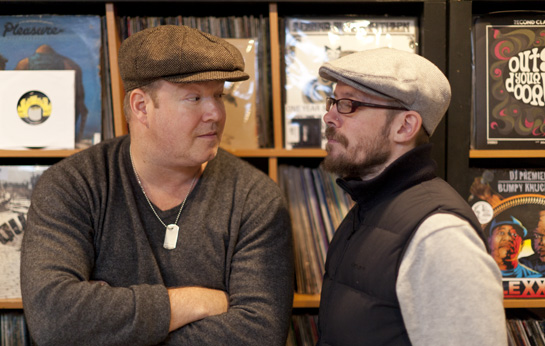 Pioneering JazzHip-HopFunk collective, The Herbaliser, will be joining Jazzanova on the stage at KOKO this Saturday as part of a typically awesome Soundcrash night. Josh Jones had a bit of a chat ahead of their show, with founders Jake Wherry and Ollie Teeba.
So you guys are playing live with Jazzanova for the first time – how did that come about?
We have had a long term relationship with Rob, who runs Soundcrash. He’s been waiting for us to finish the new album so he can get us playing some new unreleased tracks live- which we will be doing on Saturday Night! FYI Our new album is called “There Were Seven” and we are releasing it ourselves on our label Department-H on 8th October.

It’s gonna be a full stage – have you worked out where everyone will be? Because it could get snug.
We’ve played twice before at KOKO and have played on stages WAY smaller… It’s better for us to be close together, we play tighter as a unit!

Will you be doing anything different especially for the show?
We will be playing four new unheard unreleased tracks from our new album “There Were Seven”.

Does it feel weird to think of how many red-eyed teenagers have sat about in their smoky bedrooms with their friends listening to your music (and playing MarioKart)?
It’s funny you mention that, as we were just remarking the other day how at shows lately we keep meeting people of a certain age that all tell us we were the soundtrack to their university years. That they all would get together and smoke loads of weed and listen to our records. High praise indeed. In fact, your photographer just told us that he used to bunk off 6th Form College to come to Stealth (’90s Ninja Tune night in Hoxton).

You’re from SW London, we admittedly don’t feature that part of town as much as we should. Where, in your neck of the woods, do you like to hang out?
We don’t get out much. (Jake) I have four children so that keeps me busy at home. If I’m out I’m usually playing a gig somewhere.
(Ollie) I live in SE London as there is bugger all to do in SW London. But, really, at 42 years old neither of us are trying to go to bars and clubs anymore. Old gits.

What else is The Herbaliser up to?
At the moment we are dealing with the mind-boggling task of self-releasing our own record and all that entails, which, take it from us, is a lot. Suddenly you are very much more aware of deadlines and how much everything costs.

When all that is done, we will chill like mad.