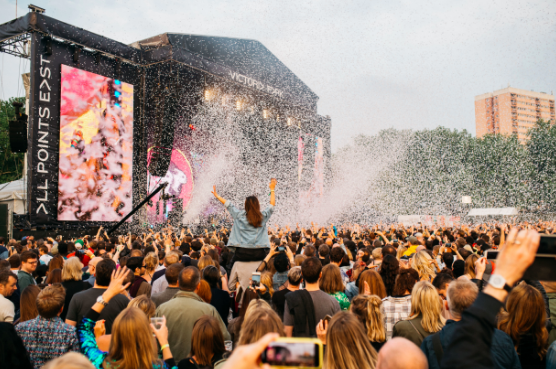 By Ben in Feature

All Points East Presents
1-3 June
From £59.95 per day
On the hunt for a low-key day festival that won’t be over-run by 17-year-olds? Look no further than this 3-day-long run of alternative rock performances. The old white men on stage – The National, Future Islands and War on Drugs – will likely be reflected in the crowd in what is set lead what is set to be a very craft beer-friendly Saturday, ahead of the inimitable Nick Cave, who takes his Bad Seeds to centre stage on Sunday. On top of this, the Jagerhaus stage will provide a home for up-and-coming British talent (and Hot Chip), with the likes of Marika Hackman and Pumarosa dropping in for more intimate sets over the course of the weekend. Nick Cave is sold out, but you can get tickets for Catfish and the Bottlemen (Friday) or The National (Saturday), here.

Field Day
1-2 June
From £49.50 per day
Field Day’s greatest coup this year has been the booking of Erykah Baduh, making a rare UK appearance as the Friday headliner. She’s in good company alongside indie crooner Moses Sumney, and upcoming London artists Loyle Carner and Nao. The latter was a highlight the first time I attended the festival in 2016, and her star has only risen since (her debut album, For All We Know, was one of the best r&b albums of that year). Saturday’s line-up doesn’t equal the star power of Badu, but the combination of Four Tet, Earl Sweatshirt and Thundercat is worth the ticket fee alone. Pick ‘em up here.

Lovebox
13-14 July
Weekend tickets from £125
Fresh off the back of blowing up the internet with the incredibly powerful new single & video This Is America, Donald Glover AKA Childish Gambino returns to the UK to close out Lovebox on Saturday night. He is joined over the course of the weekend by Vince Staples, NERD, Skepta, The Wu-Tang Clan, Anderson .PAAK and SZA…. Making it, by far, the best rap music festival in London this summer.As far as I’m concerned, it’s in for a penny, in for a pound here, as if you want to see both Gambino and Staples (and why on earth wouldn’t you?), you’ll have to head to both days.  The line-up is stacked enough to merit the grim Sunday comedown – get your tickets here.

Citadel
Sunday 16th July
From £55
Citadel will make use of Lovebox’s set-up at the tail-end of the weekend to bring Tame Impala in for their only UK gig of the summer. They’ll be joined by Scottish synth-poppers CHVRCHES – off the back of their new album Love is Dead – Leon Bridges and Hot Chip’s Joe Goddard, who will be performing one of his world-beating DJ sets. There’s also a few nice, chilled-out activities for those who are feeling worse for the wear after the weekend including mass yoga, Dance Workshops and a performance based on the day’s papers. Get your tickets here.

Kaleidoscope Festival
Saturday 21st July
From £50.75
The Flaming Lips and The Go! Team lead a psychadelic-friendly line-up (Beth Orton, the Mystery Jets and Ghostpoet are involved, too), while there will be plenty of non-musical activities to keep you engaged throughout the day, including comedy sets from Andrew Maxwell and Katherine Ryan and high-flying acrobatics from Gorilla Circus. Get your tickets here.